The things we build, the things we dream and bury in what we build – re-building as listening. 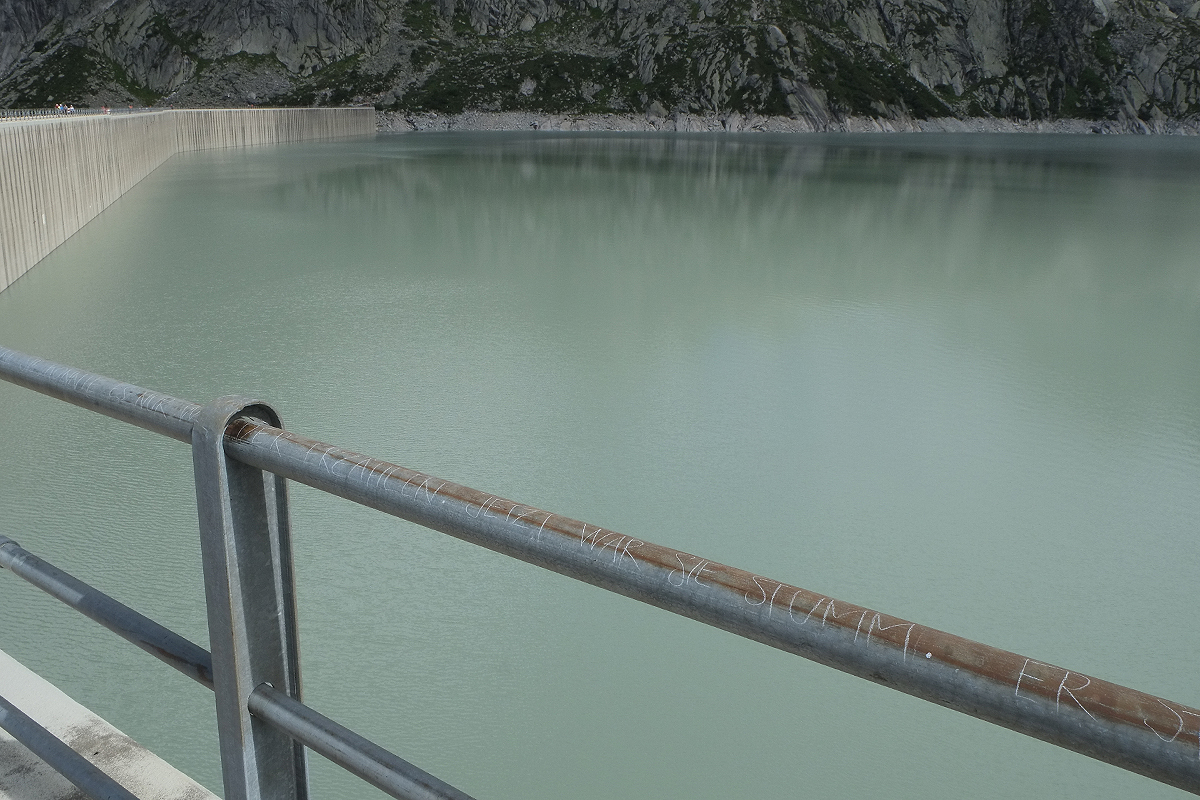 Secret at the Periphery

There is a handwritten story on the handrail of the hydroelectric dam built in 1959 by the city of Zurich. The 760m or 5000 words long story tells about two mayors who decide to go on a hike to find the edge of the city. Following the trail of energy resource they end up at the source of the energy, the dam. The story gets a twist as one of the mayors falls into the lake by night and reappears the next morning.

Arte Albigna, 2017, Text available in issue Fig of the magazine 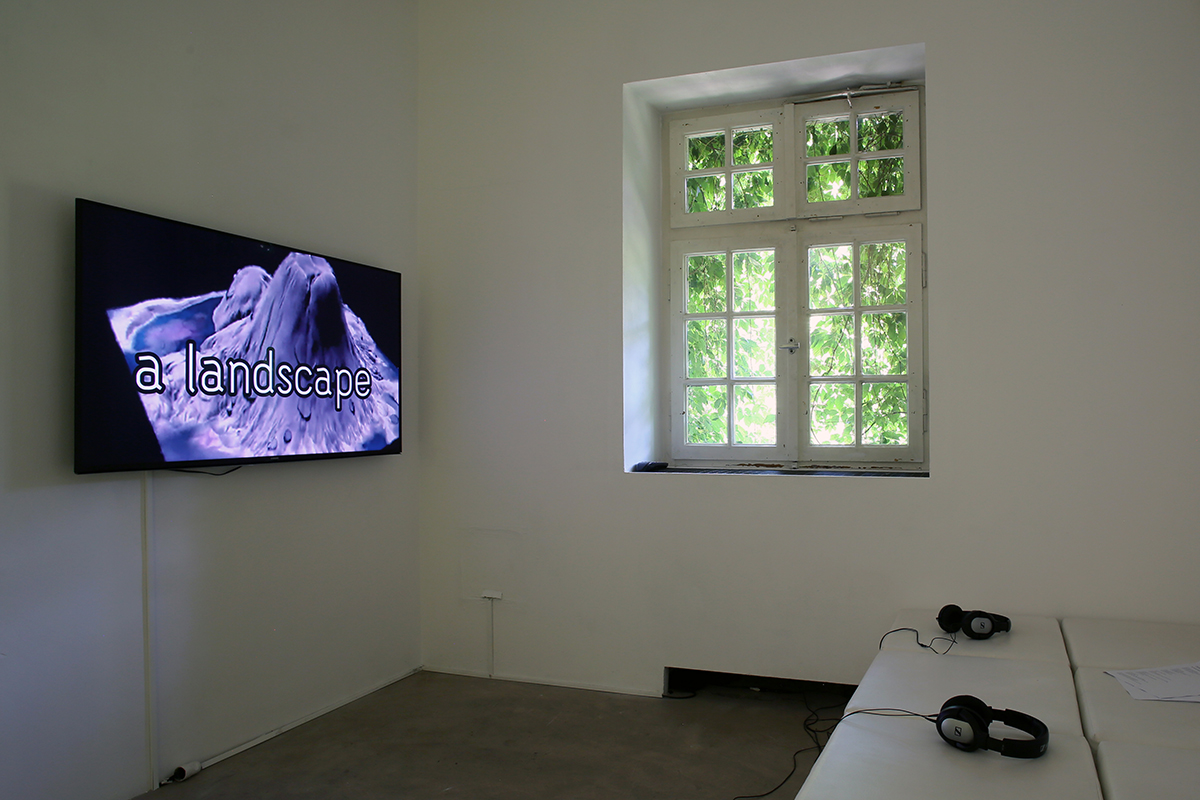 Videopoem with a text written together with Reza Negarestani confronting the work of the river and the mason. 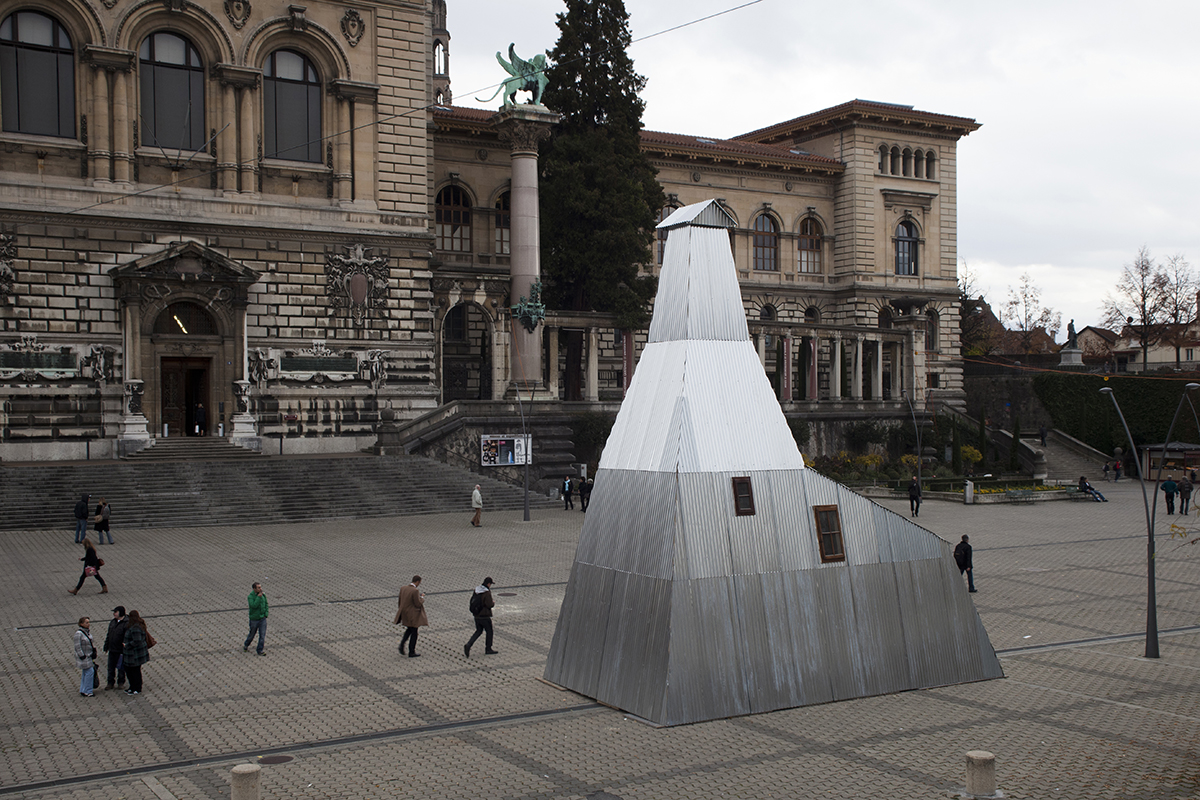 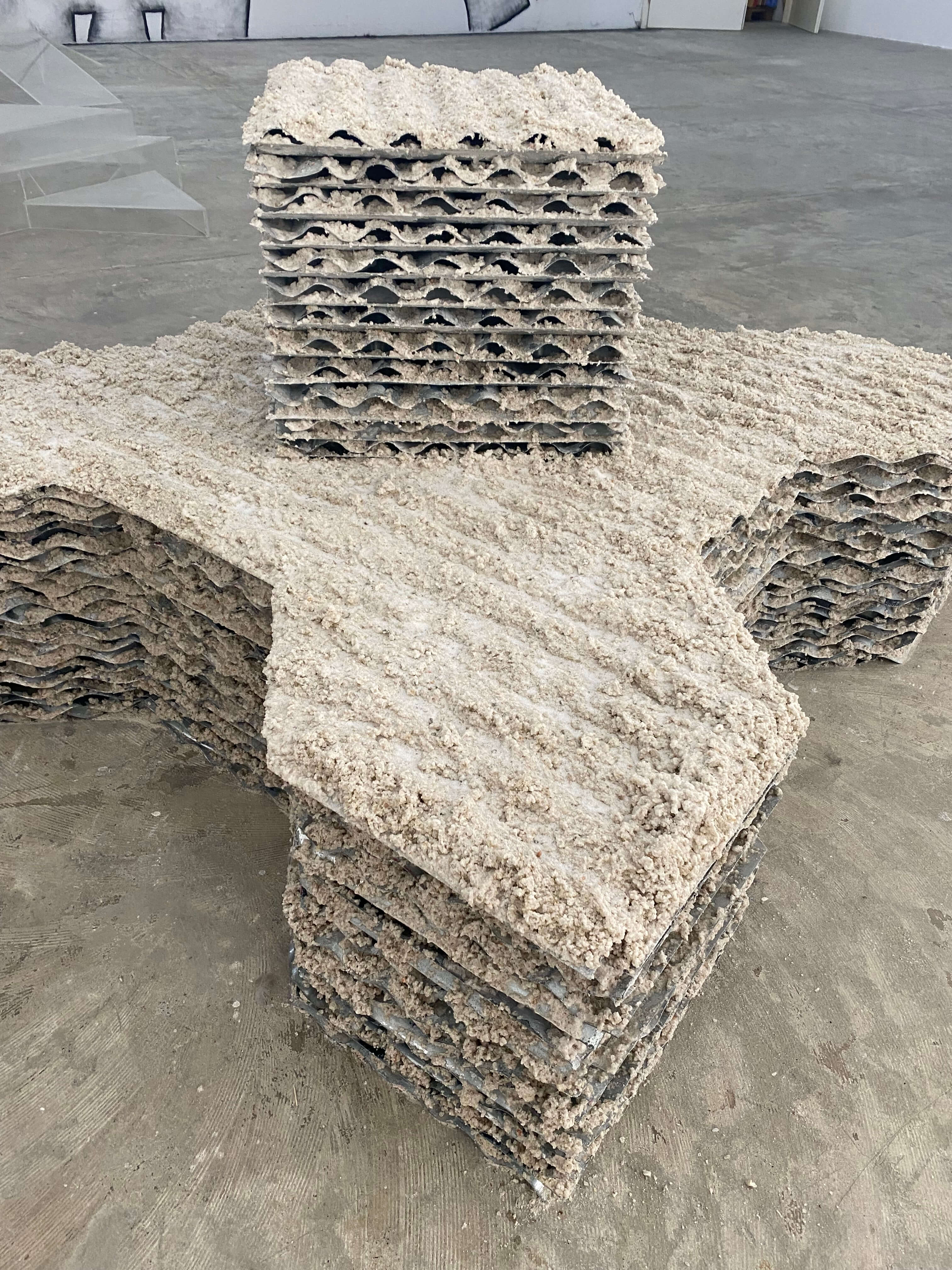 April 24, 2021
Installation of Brise-Lame (2014), stack of corrugated sheets in the shape of an x-block, a sculpture by Yves Mettler. The sheet comes from Oil Rig, an installation created by the artist for Urbaines 2011 on the Place de la Riponne in Lausanne.
May 12, 2021
Pauline Cordier intervenes on Yves Mettler's x-block by covering it with salt crystals. Collaboration co-signed and newly titled Sous le sel, un Brise-Lame.

I rebuilt the shelter of an oil-drilling rig, built not far from Lausanne, in 1929, following a postcard of it. The object looks like a basic church, but also as a modern monument with its simple, functional and minimal shape. The drilling has been conducted by a water diviner and didn’t hit any oil, although drilling quite deep. Planting the drill in the middle of the city on one hand allows to reactualize the controversy and the question of energy, but also to access the city’s undergound and let its history spill over the surface: under the public square often described as a desert, there is a subterranenan parking, a cinema, a river and the only metro of Switzerland. After the festival, the rig is dismantled and shown in pieces in a show which takes place 3 months later in the art museum next to the square. The installation allows to explore the object and its thematics, working with the idea of a sedimenting memory of the city’s inhabitants. A psychanalytical thrilling dialogue between The Rig and Patient O appears along the show, exploring the twisted trauma of humanity on Earth. 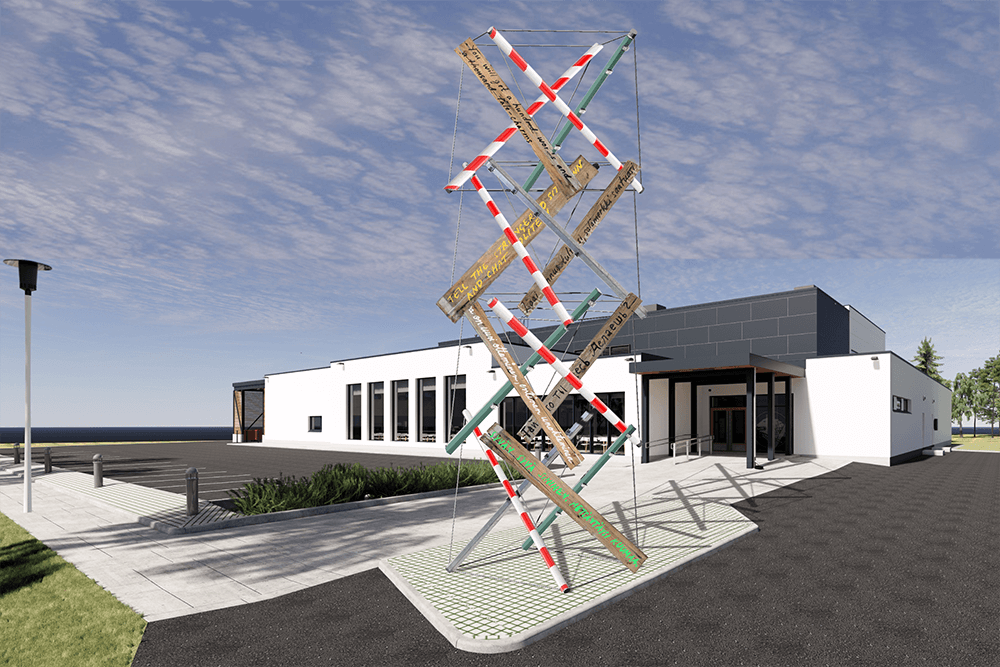 The tensegrity sculpture proposed for the canteen building of the Finnish border guard garrison in Immola is entangled with a narrative structure. The “legs” of the structure refer to the equipments of border passages and “green borders”. The painted texts, including quotes from poets of the region, are about the thematic of border, passage, the foreign and the close, empathy and fear, nature, the forest. Together they open a net of references that offer support and expression to the feelings of the canteen’s users. Some are very direct, other quotes are poetic and open to interpretation. 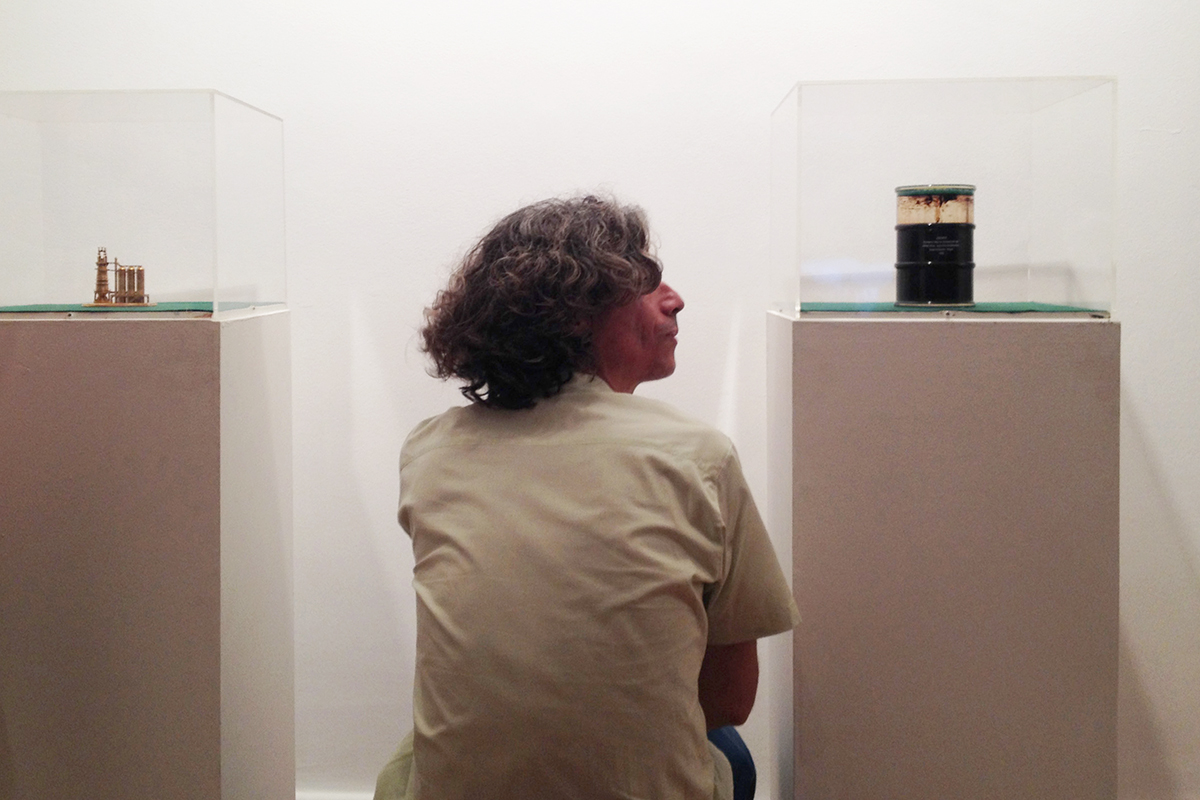 Reflecting on the constitution of the brazilian republic, the installation extracts two objects linking the infrastructures for extracting natural resources and political moves by two brazilian presidents. A model in gold of the first brazilian high oven, gift to president Vargas in 1947, and a miniature oil-barrel with the first deep-sea oil presented to the population by Lula in 2008. A dialogue between the two objects explores their function and symbols as being part of the museum and the history of the brazilian republic. 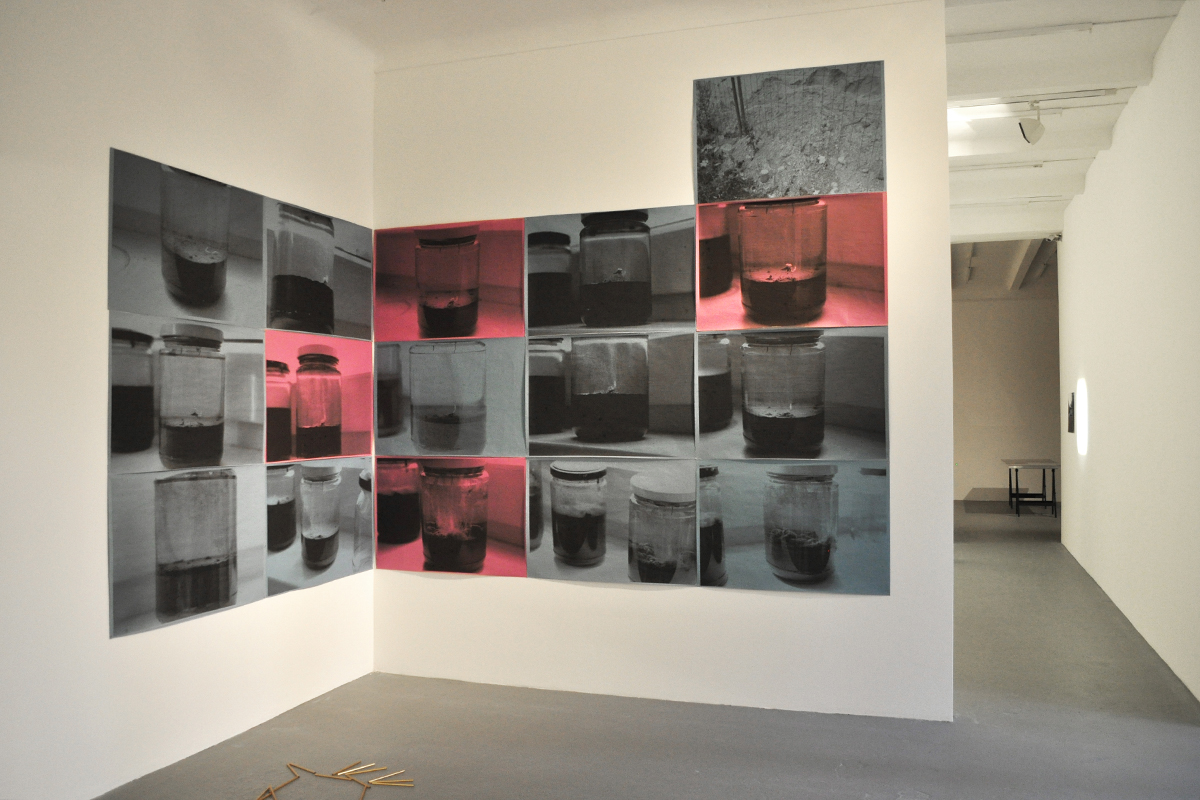 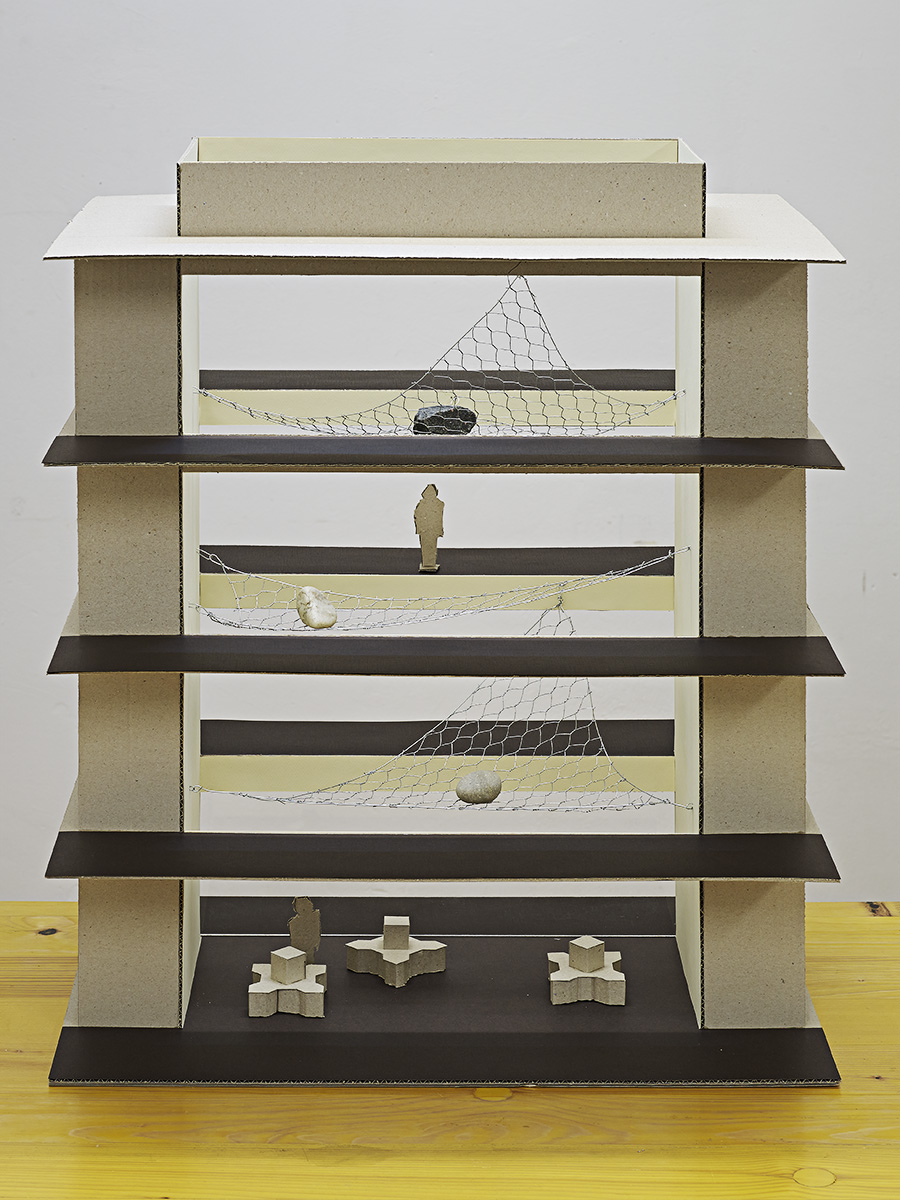 Invited art-in-building competition about the design of an atrium in the Campus Brugg-Windisch (CH), a university of applied sciences that teaches technology, economics and pedagogy, and that should serve as a meeting point and place to stay.

Brugg lies on three rivers, which historically meant that Brugg was able to develop into an important city. If you follow these rivers to their origins from Brugg, you end up in the mountains on the one hand and in the sea on the other. And both the sea and the mountains have posed a challenge for mankind and theri settlement for a long time.
In Brugg there is a company that is involved in developing this knowledge, KabelBrugg. Geobrugg is a subsidiary of this holding company, which specializes in the development of safety nets. There are three stones in the nets stretched in the courtyard. The stones come from the source areas of the three rivers that meet in Brugg. They float in these nets in the air, almost like in a three-dimensional zen garden or like enlarged dream catchers. In Holland, on the other hand, there is a long traditions in expanding and shaping the coasts, always under the pressure of the mighty ocean from which land has to be wrested. Delta Marine Consultants has developed the “Xblocs”, a reproducible concrete shape that is supposed to break the waves on the dams.
As with the safety nets, specific knowledge is created here that can be distributed industrially around the world. Both companies contribute equally to maintaining and expanding human living space. The xblocs lie at the bottom of the atrium, which, like dams by the sea, act as seating in the place of residence. The industrial and rough materiality of the objects also comes against the architecture, which understands itself like a machine and starts with the tradition of industrial spaces.

Earth samples captured in order to observe their composition stay exposed to sun. The organic material, first invisible, letting the earth in the glass appear like a desert, slowly develops. In a glass a worm is caught alive. After dying it transforms into a new material and composes a totally new landscape only out of what is in the glass. The glass is a mobile closed universe. The prints are instantanés of this autonomous world to which only the energy of the sun is added. The paper is recycling material tainted with basic inks to override the multiple traces of the included materials

The Ultimate Capital is the Sun, NGBK, Berlin, 2014 – interview on Deutschlandfunk Kultur 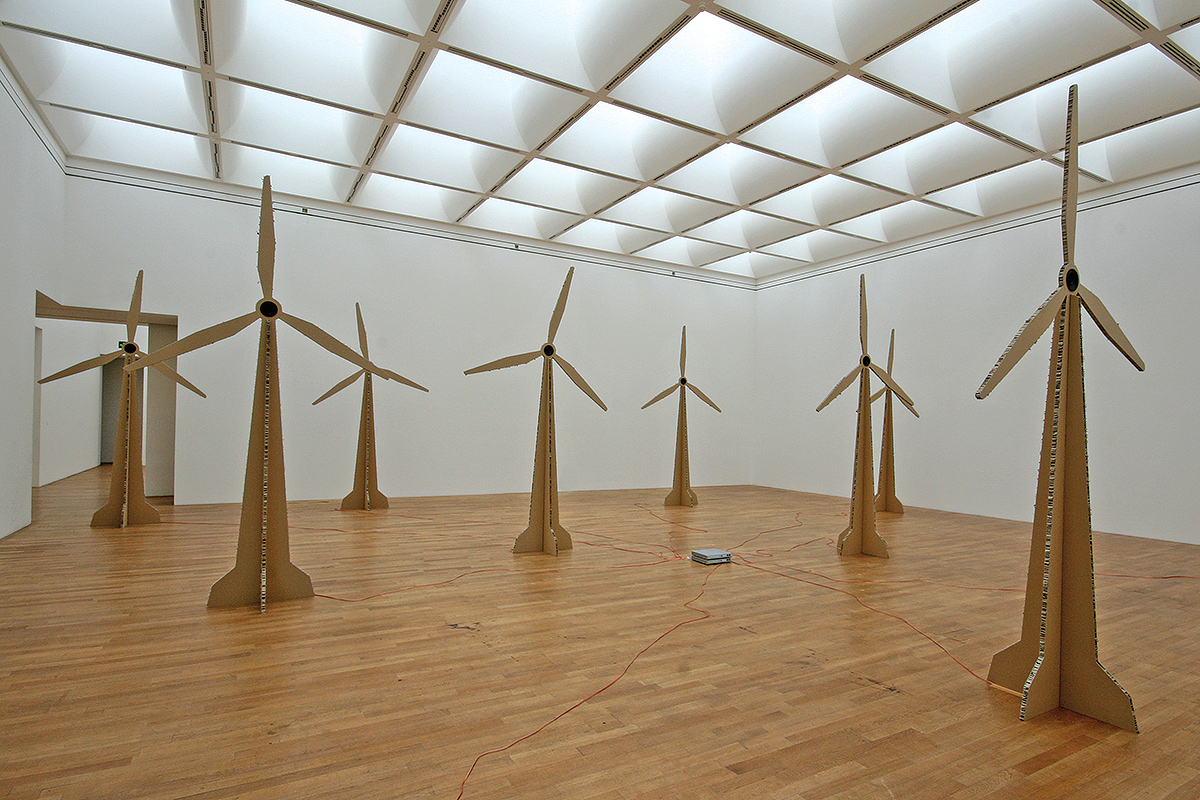 A group of windmill models are killing time discussing issues about global consciousness, the origin of language, nature and humans, energy issues and desire for eternity. Along the discussion they build subjective positions, lose them again, joining in canons. 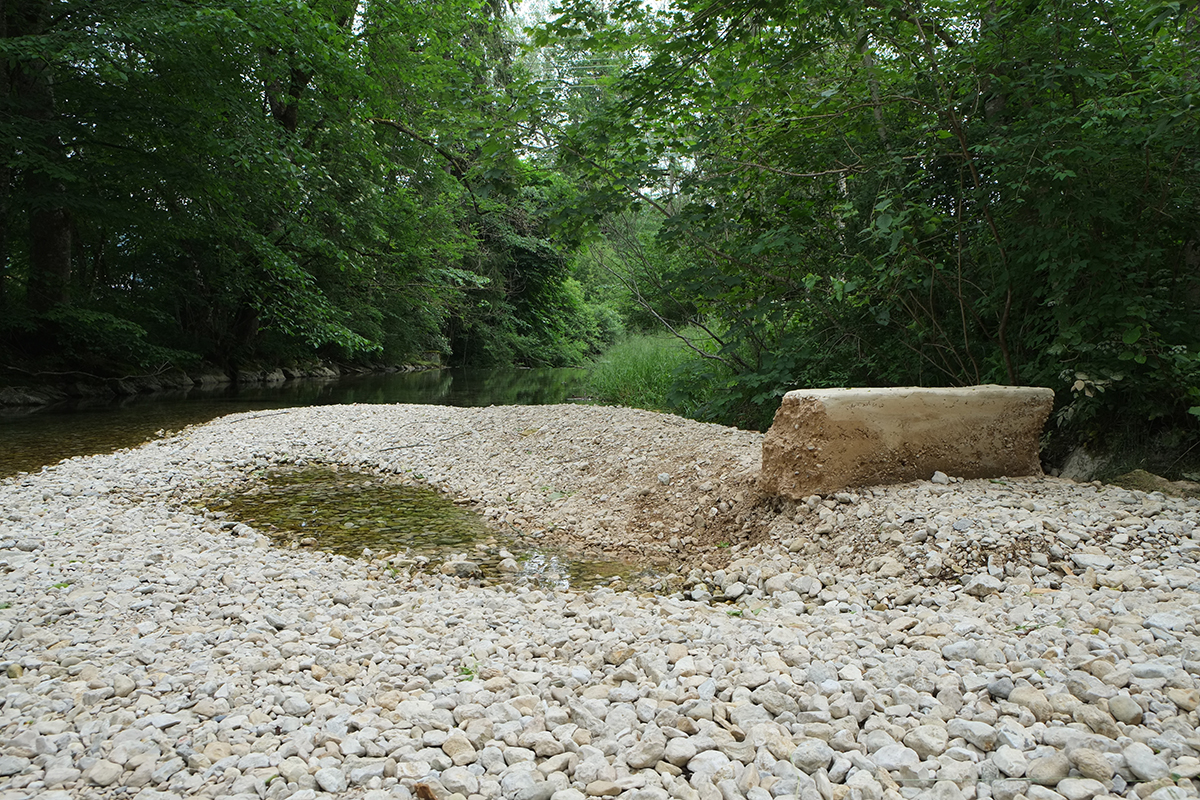 Seven objects of stamped earth, a crude earth concrete technique, are built on the riverbed of an alpine river, imitating concrete infrastructures used to slow down the stream and therefore act on the river’s behaviour. The nature of the objets is voluntarily inadequate: While it resists differently than concrete on sudden raise, it dissolves also and turns back into earth. The time of the sculptures is the time of the show. 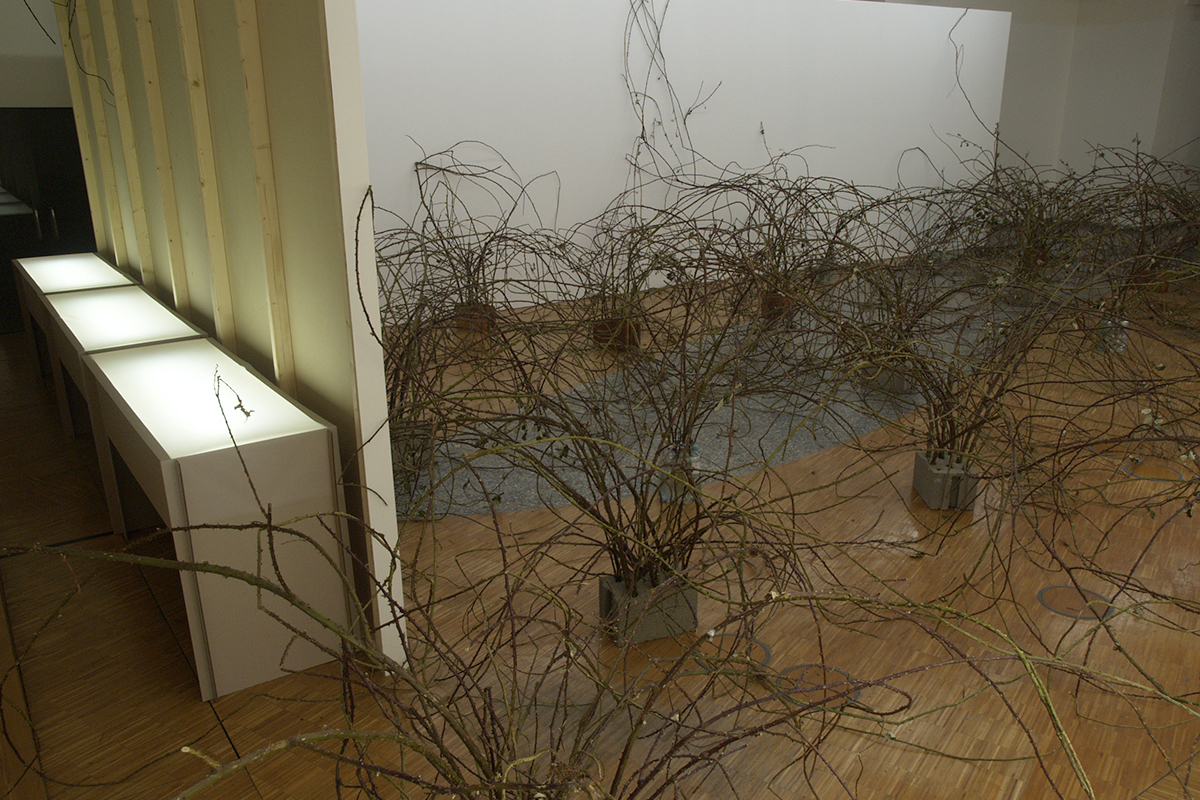 The show’s title is derived from a piece of land next to which I lived some years ago, the Aspanggründe, where the Eurogate has been planned in 2000 and now will be built over with a green housing/commerce/office complex. As I went on the site, I encountered a motive I already worked with in Geneva with Les Roncières – a housing project: blackberry bushes. From this point on I got interested in the phenomenon of exclusion and codification of both the integrated and the neglected public space. The Bawag Contemporary is located in a former bank space, in front of a church that opened at the same time a dorm for homeless people who might also be summer residents of the Aspanggründe. The exhibition space was rendered inaccessible with bushes from the speculated area. Behind the plasterwall, 3 «blind» vitrines were lit, hosting sound pieces: a discussion on the past, the present and the future planned for the Aspanggründe and a series of field recordings from my first exploration into the area. Full description here. 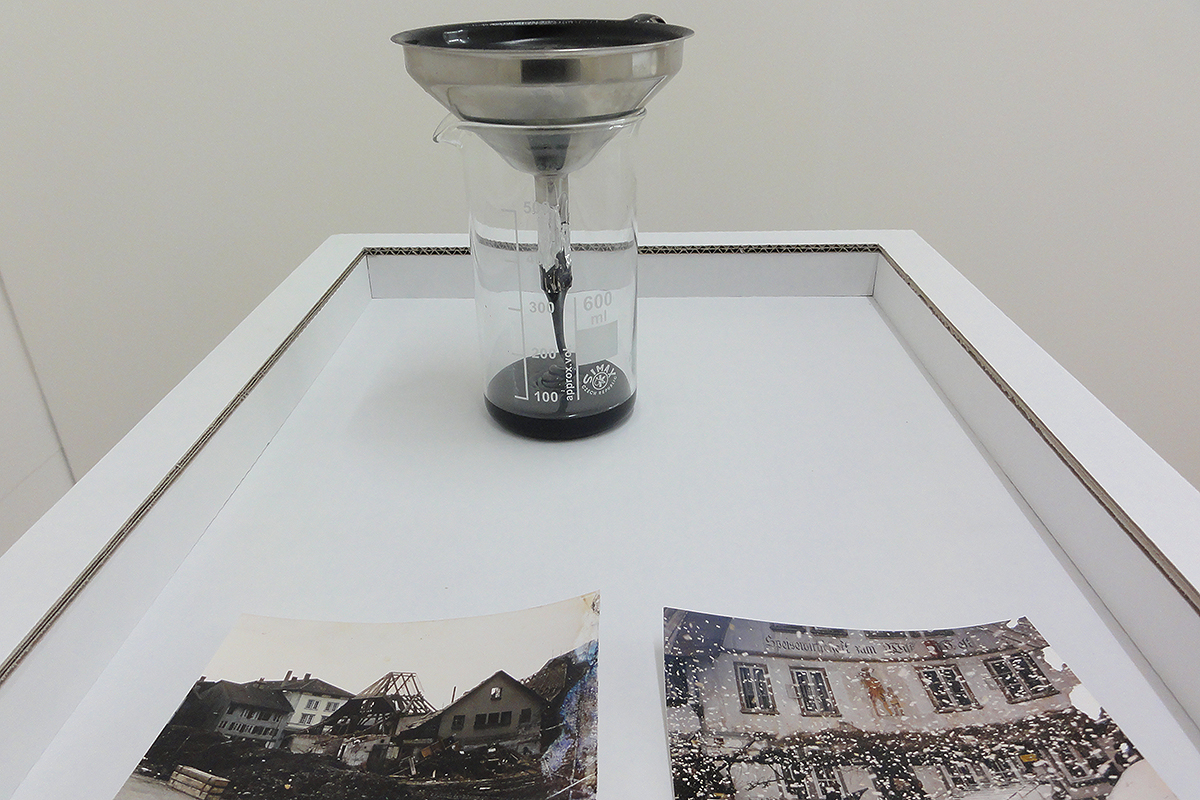 Show following strings of a mobile asphalt plant produced by a company based in Langenthal and a military exercise burning an old Inn in 1981. Full documentation and online pdf available here. 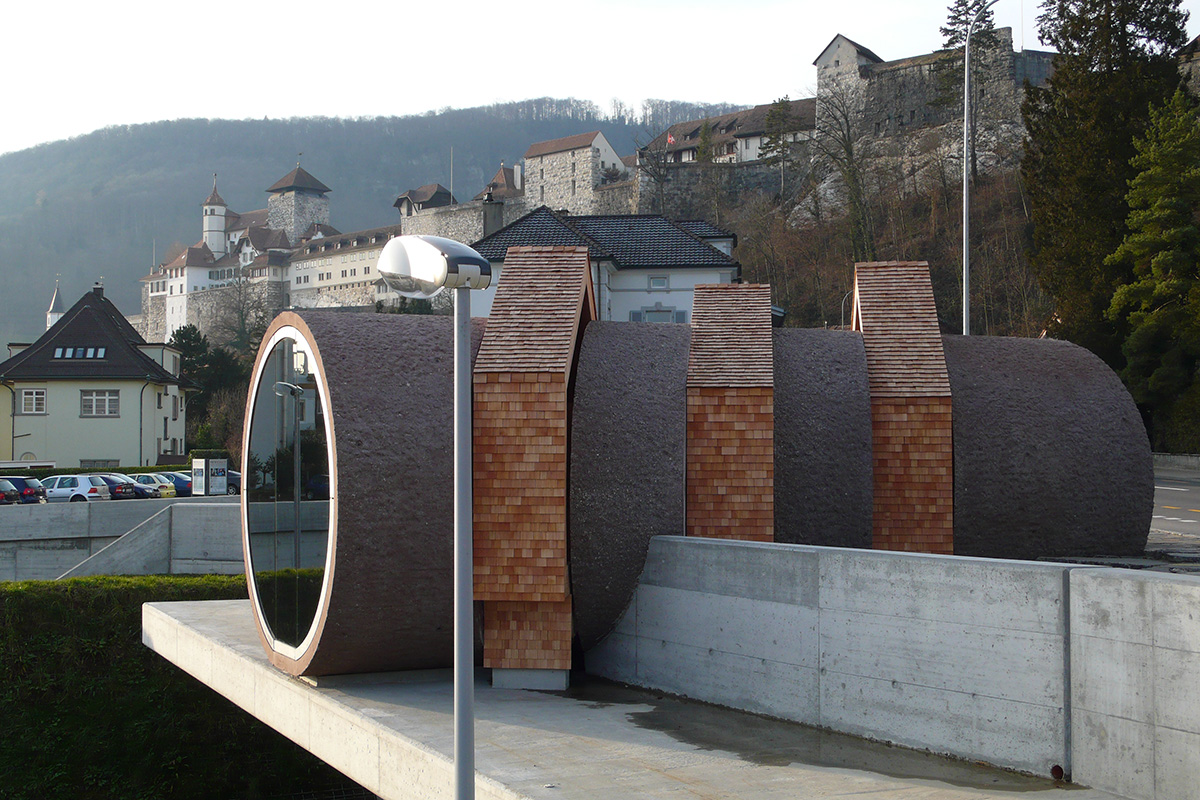 As a permanent public art commission, the project considers the building of a deviation tunnel and the history of the town of Aarburg at the precise crossing of the north-south route from Basel to Chiasso and the east-west route from Bern to Zurich. The pavillion is built on the top of the central tunnel entrance and is situated as a narrative and symbolic interface between the local life and the alien transit. Stories are saved and processed through a website hosted on the town's servers.