"Europe Squares" is an art research and intervention project ongoing since 2002 that explores the relations between the symbolic values and the concrete urban situations of squares named "Europe Square", in and outside Europe. The Mayor's Series is the narrative of a fictional mayor that travels from square to square, looking for models for the one he wants to build in his hometown. Meanwhile, the hometown has to govern itself without its mayor. The project stands for a pluralistic understanding of Europe. It sees the cities as the sites that can cope with the many contradictory ideas and models of Europe

Europe Square (From with Love), Photographs, Postcards, inception work of the Mayor's Series 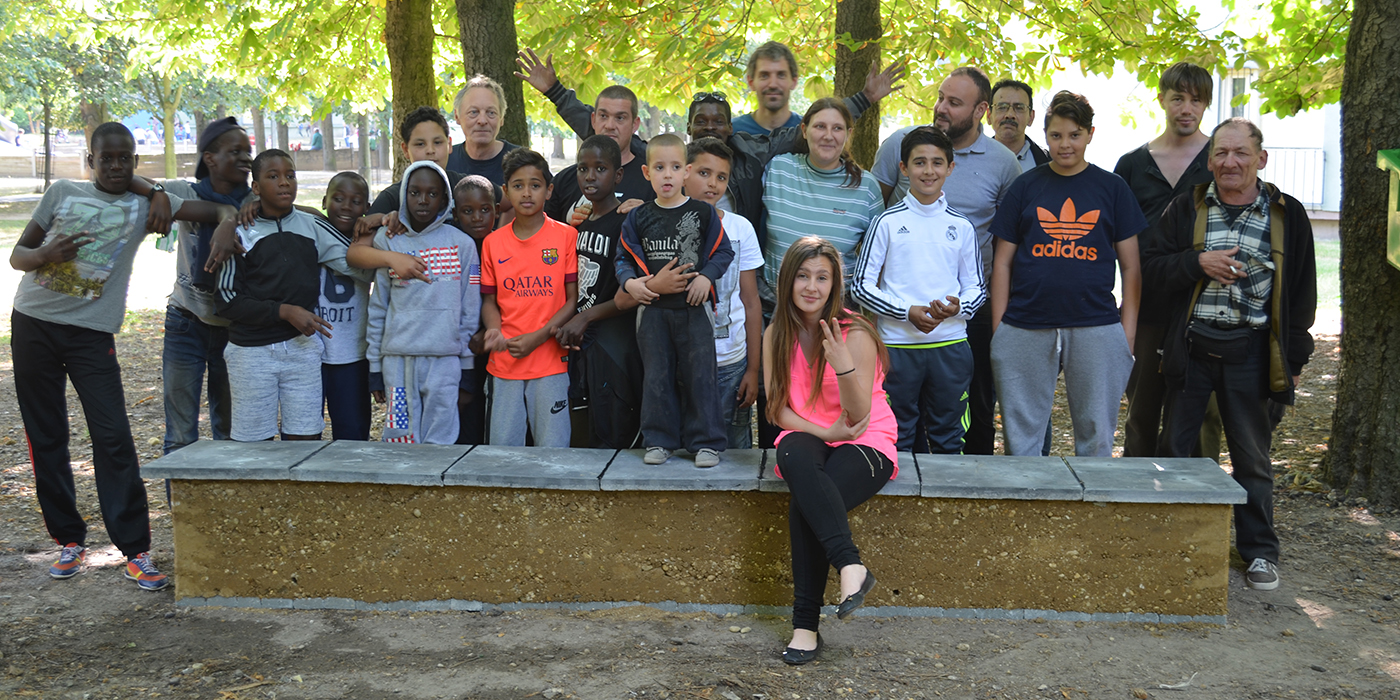 Stamped earth benches built around the Europe Square with the inhabitants of the Cité de l'Abreuvoir, Bobigny, France 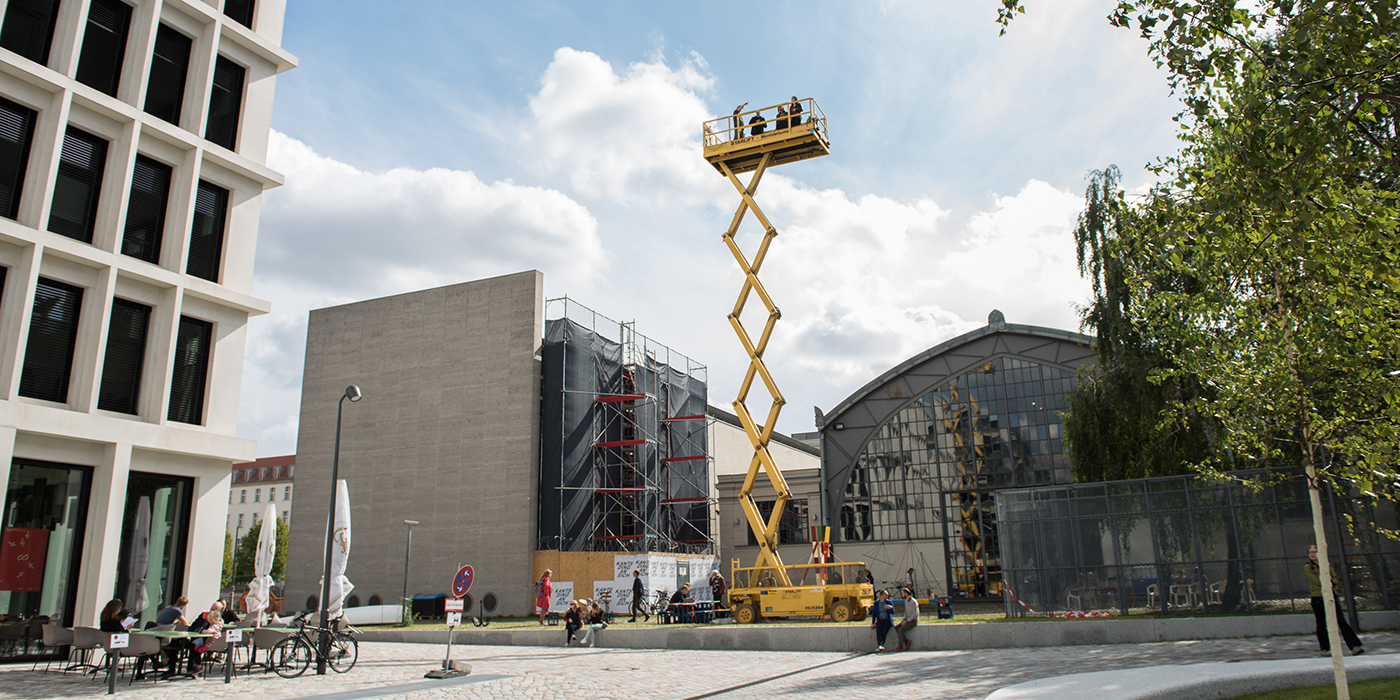 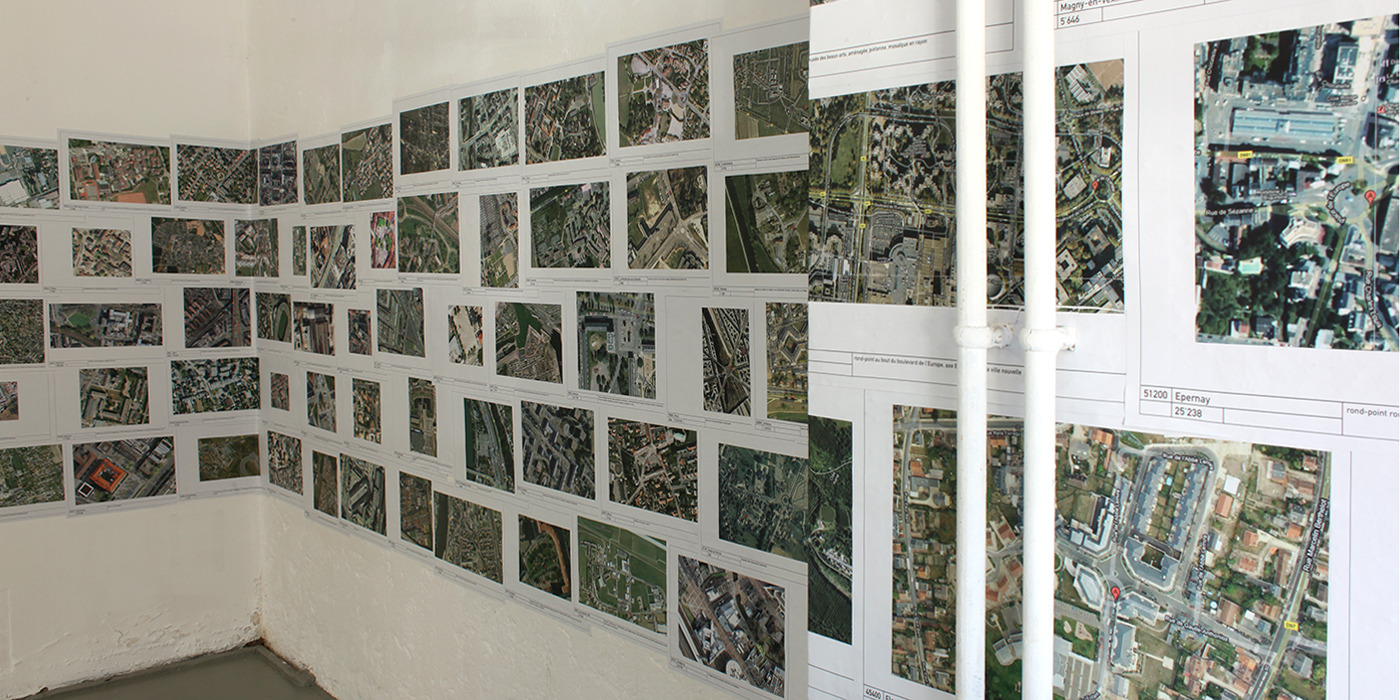 Augmented Bahnhofsviertel is an art project by the freitagsküche in digital public space launched in September 2021. The invited artists develop works for locations around the Frankfurt train station district.

“Europaplatz (Frankfurt)” refers to the relationship between the term “Europe” and the investor and urban development project “Europaviertel” and the resulting mechanisms of urban inclusion and exclusion. 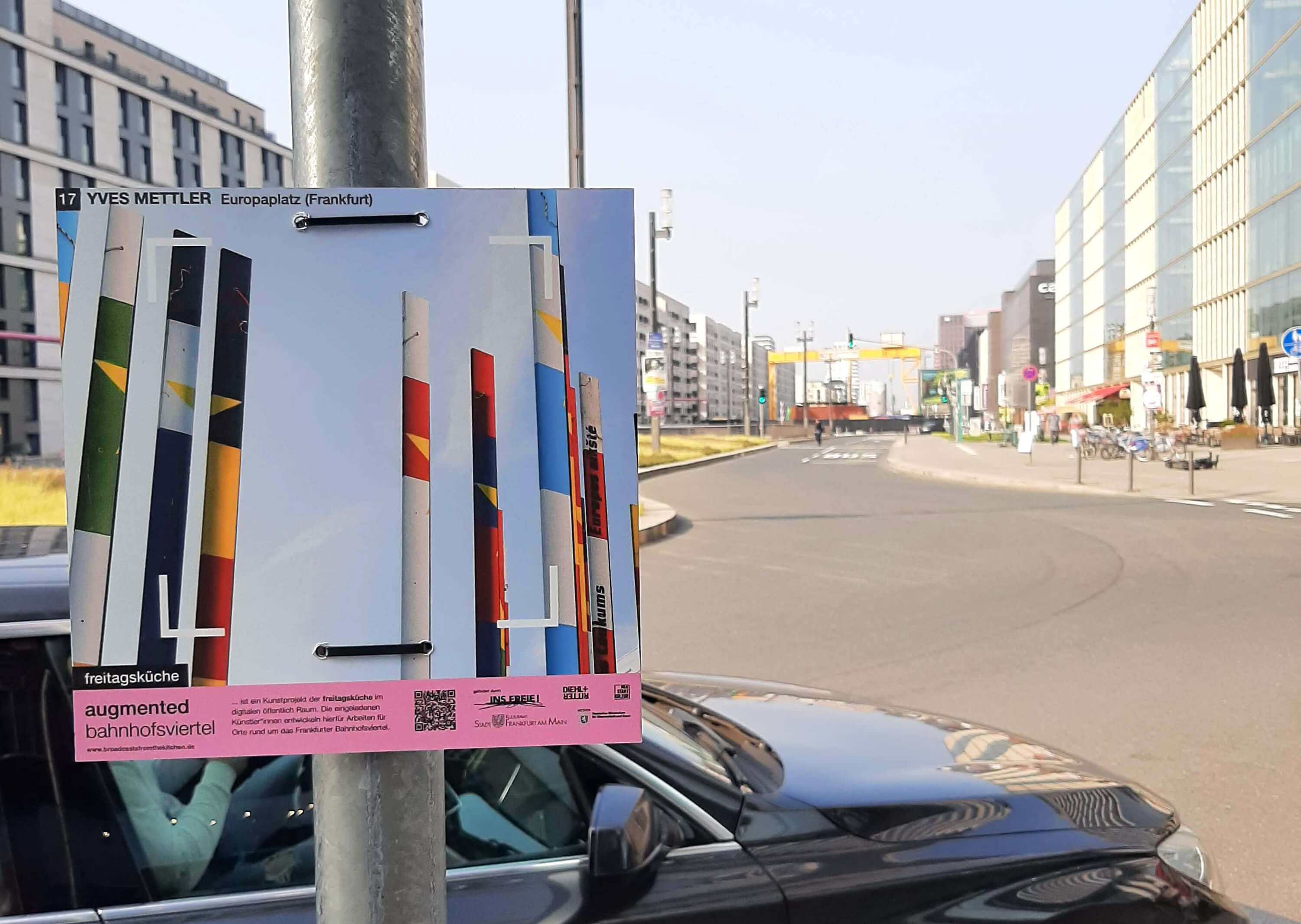 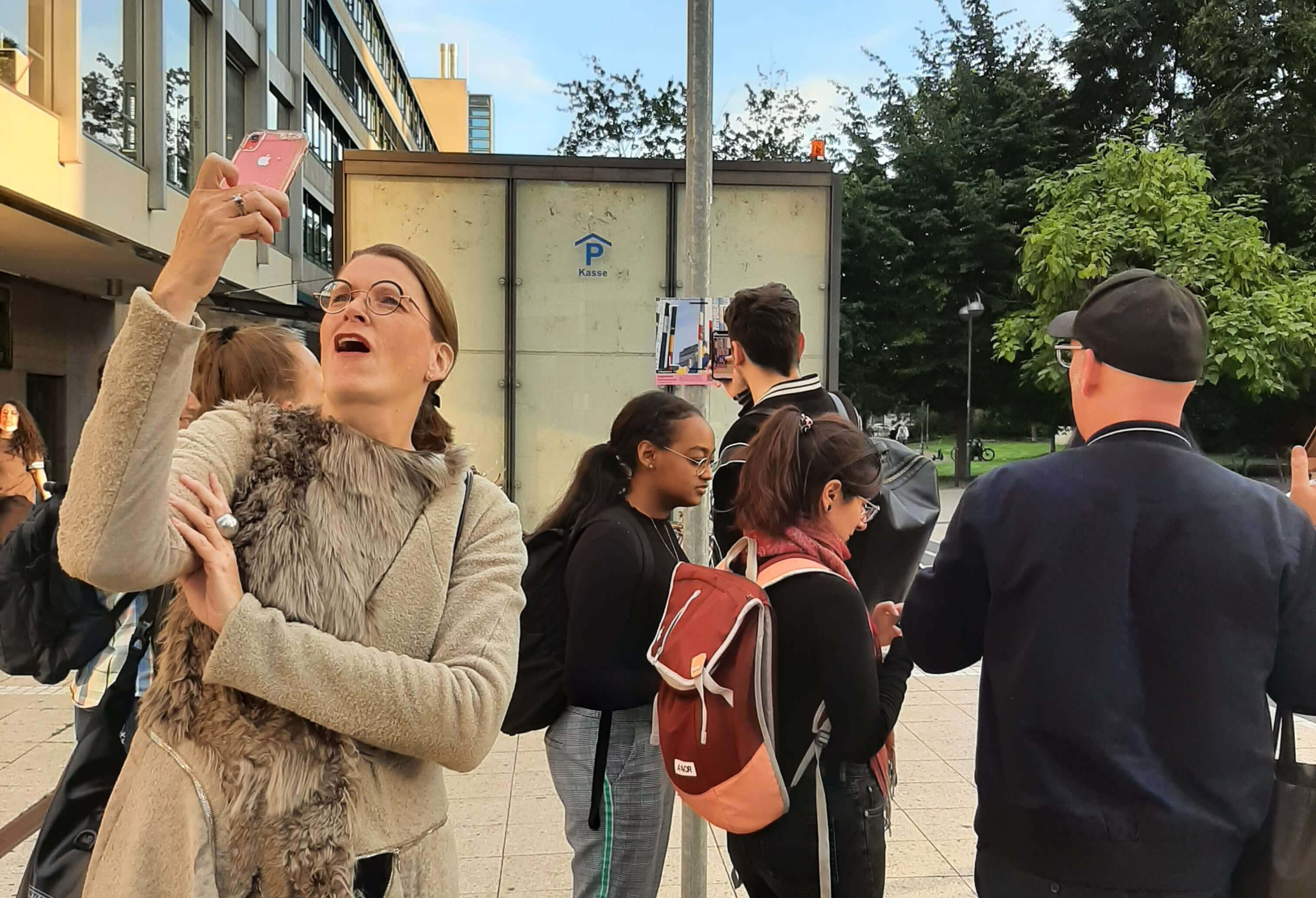 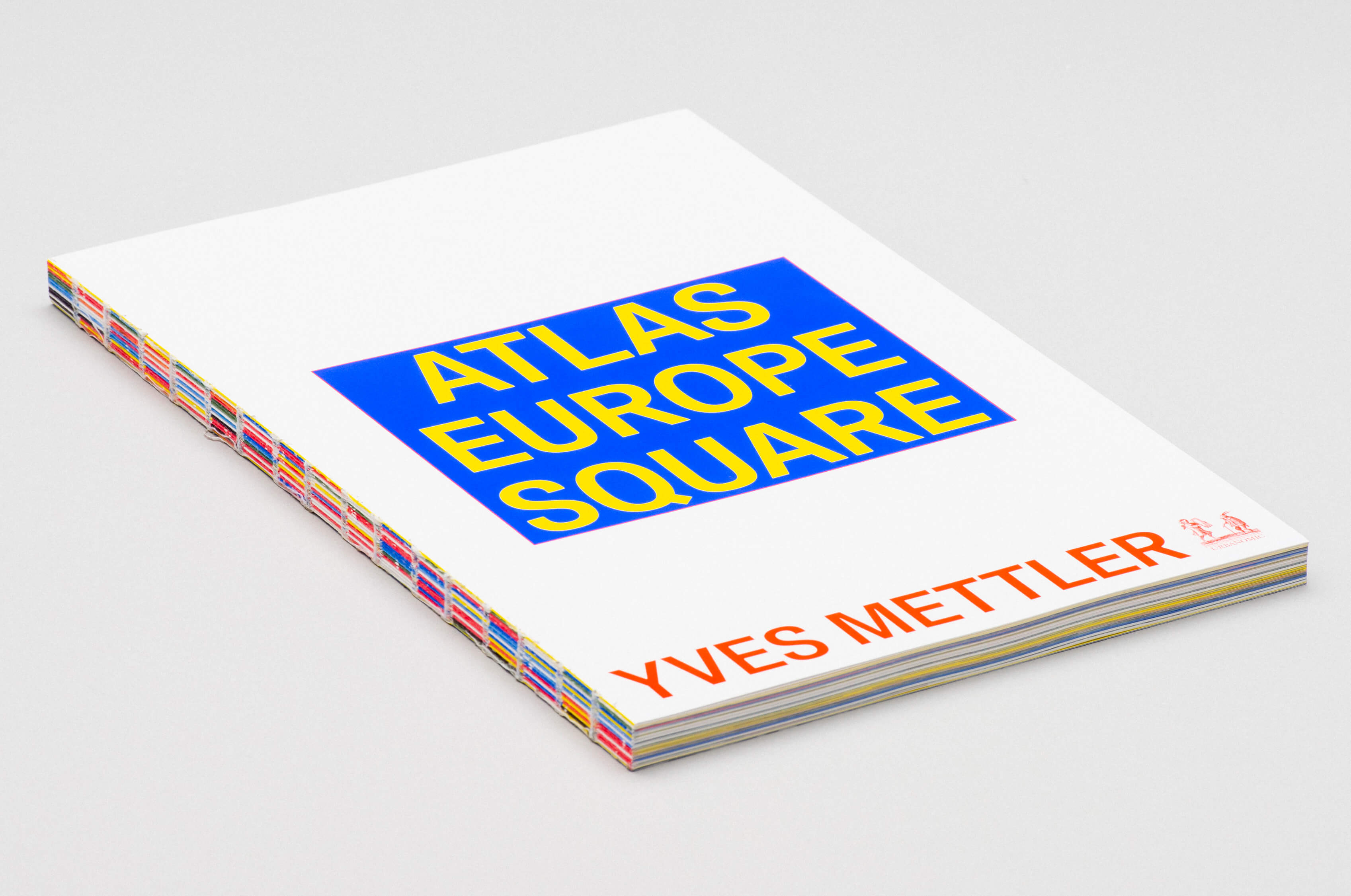 If the built environment is a record of our modes of organisation and the compromises we make in order to live together, then what are we to make of the plethora of Europe Squares, Europa Places, Places de l’Europe, and Europaplatzes? Public spaces that connect numerous disparate towns and cities through a ‘supersite’ called Europe, today they may appear as avatars of an idea in crisis, as ‘eurocentric values’ and the concept of Europe as a unified political space are attacked and eroded from all sides. 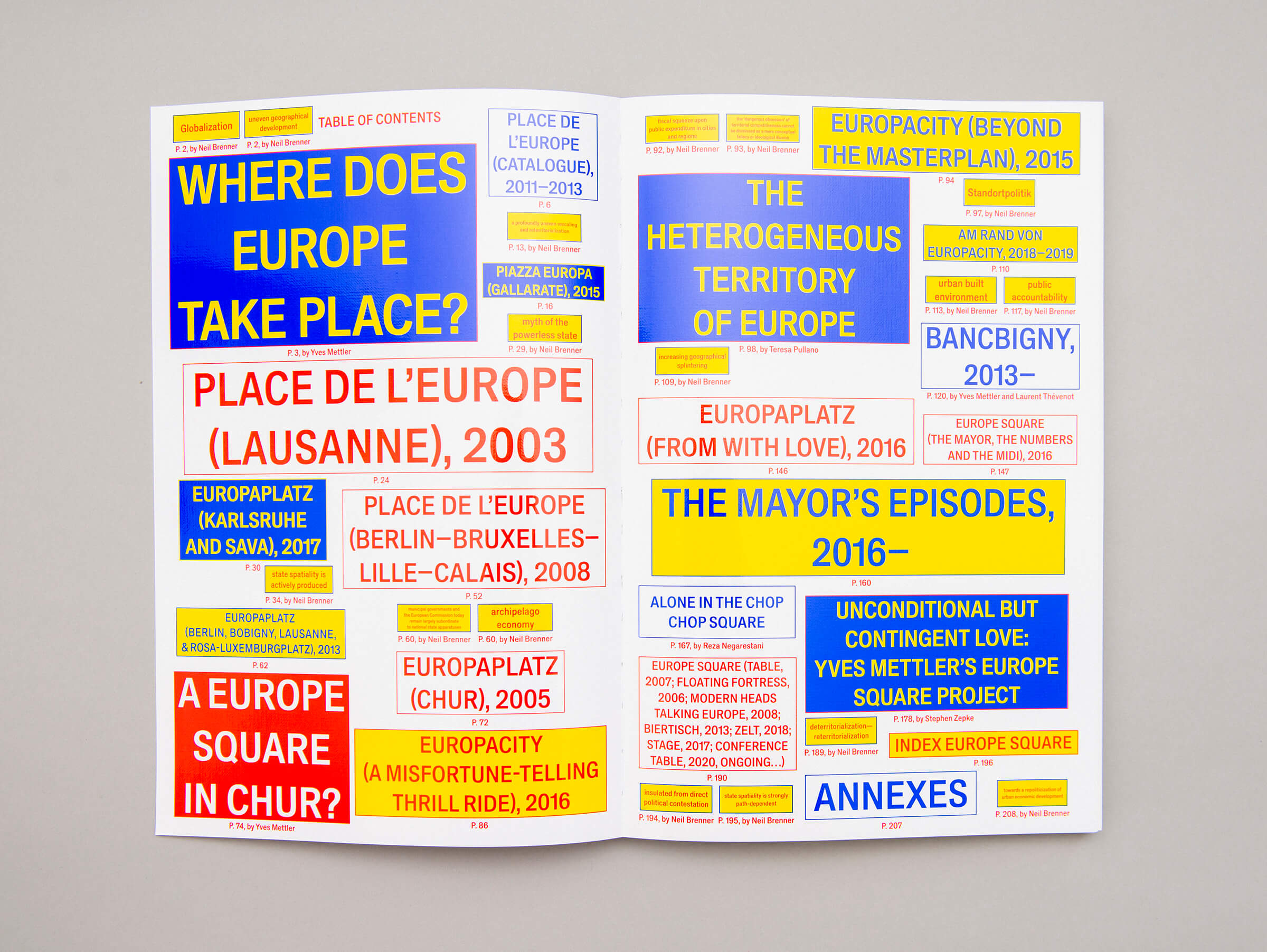 Atlas Europe Square documents a body of work by Swiss artist Yves Mettler who, since 2003, has engaged in an ongoing mapping and documentation of these sites, along with a series of projects triangulating between particular squares, interrogating their differing architectural, environmental, and public functions, and what they tell us about the ideality of ‘Europe’ and the (im)possibility of its concrete instantiation.

Alongside extensive photographic documentation, Atlas Europe Square contains writings and reflections by the artist alongside texts by Reza Negarestani, Teresa Pullano, Laurent Thévenot, and Stephen Zepke, discussing Mettler’s work and addressing the question of how to square ‘Europe’ with the contemporary complex that connects the city to the nation state and the global economy. 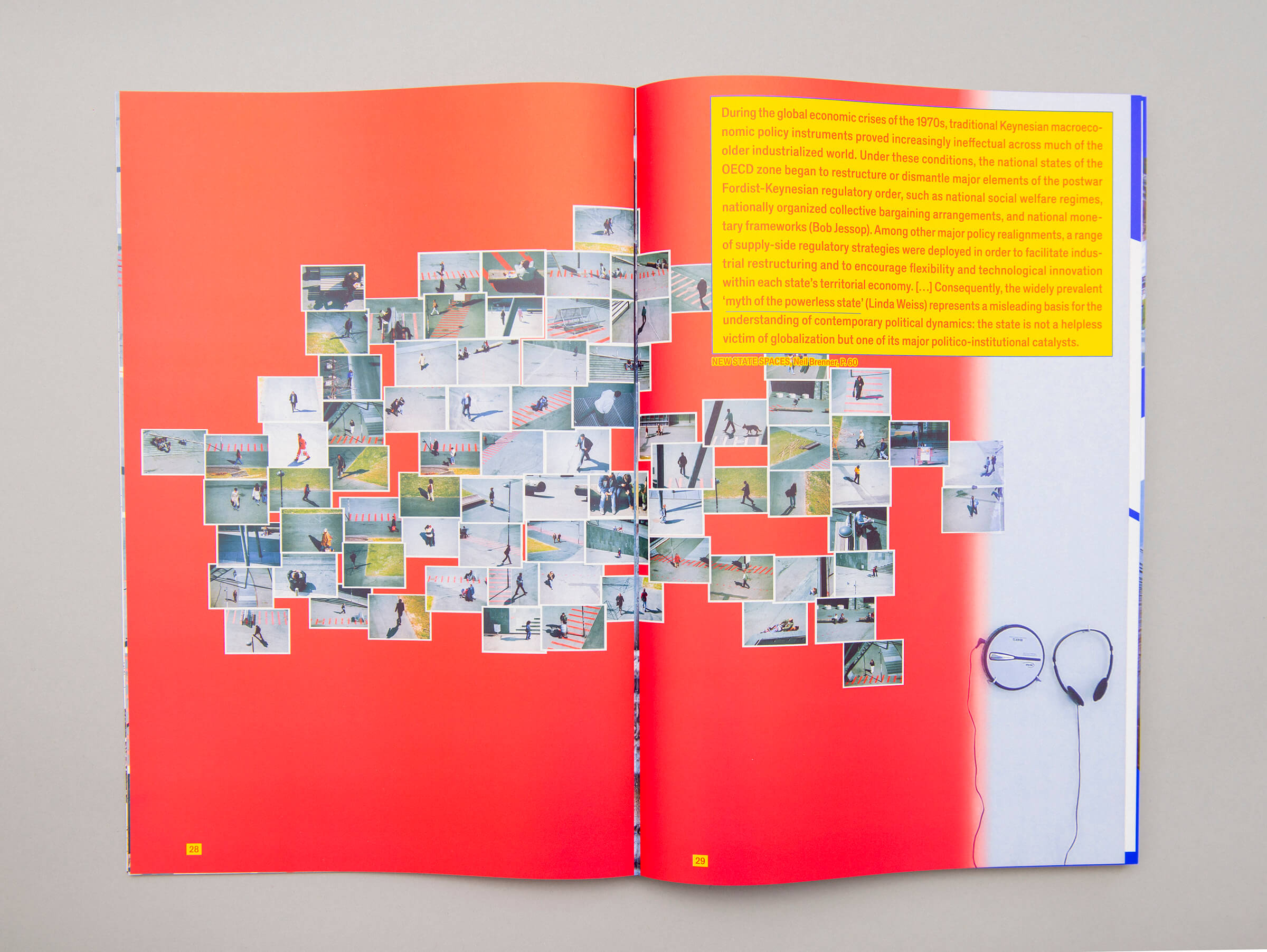 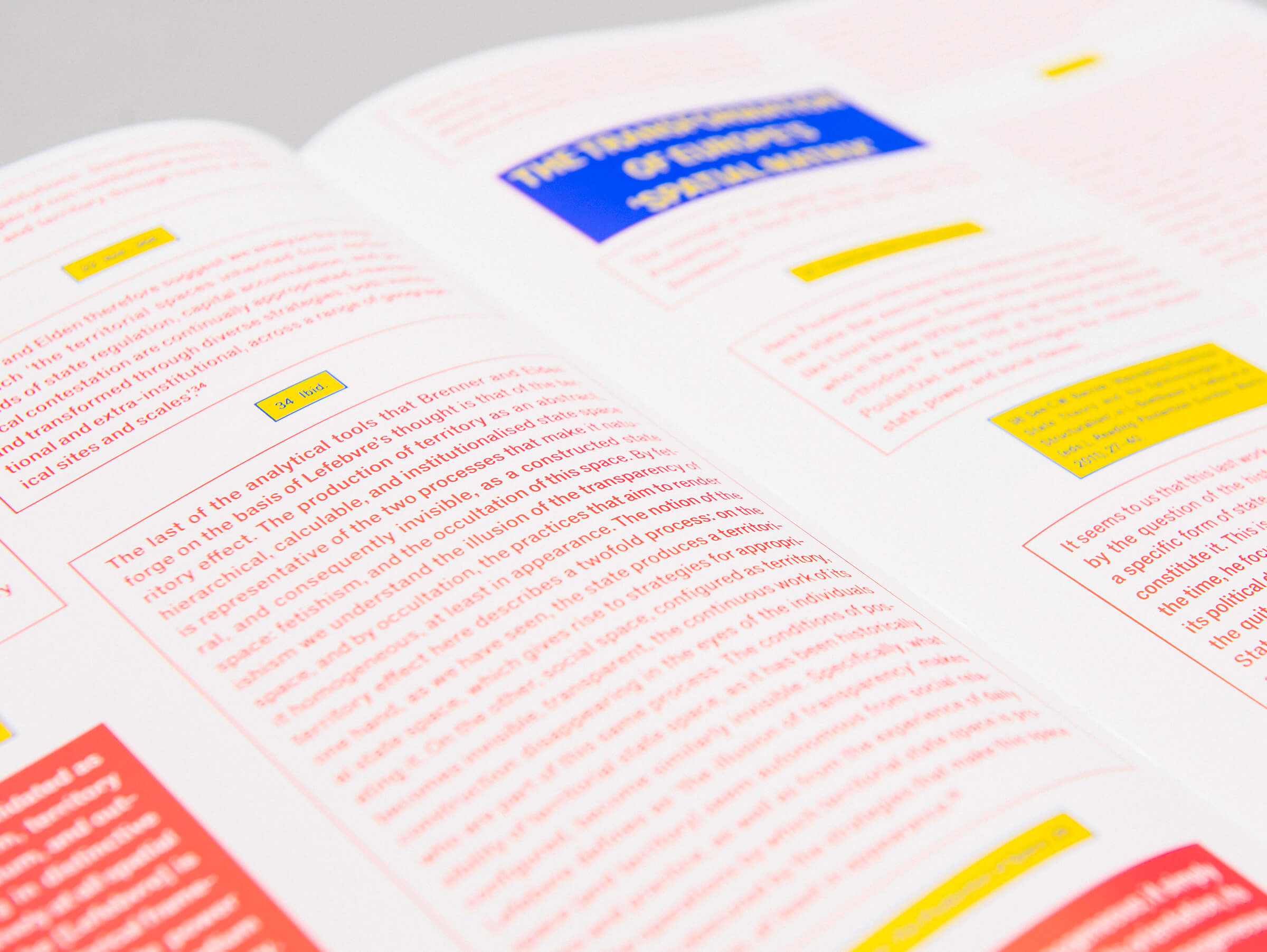 Published by Urbanomic and designed by Dualroom, the book has been printed using a three-colour process with solid Red, Yellow, and Blue inks, with the photographic reproductions translated from CMYK using a colour profile provided by colorlibrary, ECAL, Lausanne.

Participative intervention in the public space, in collaboration with the Jüdisches Museum Hohenems, June-October 2021. 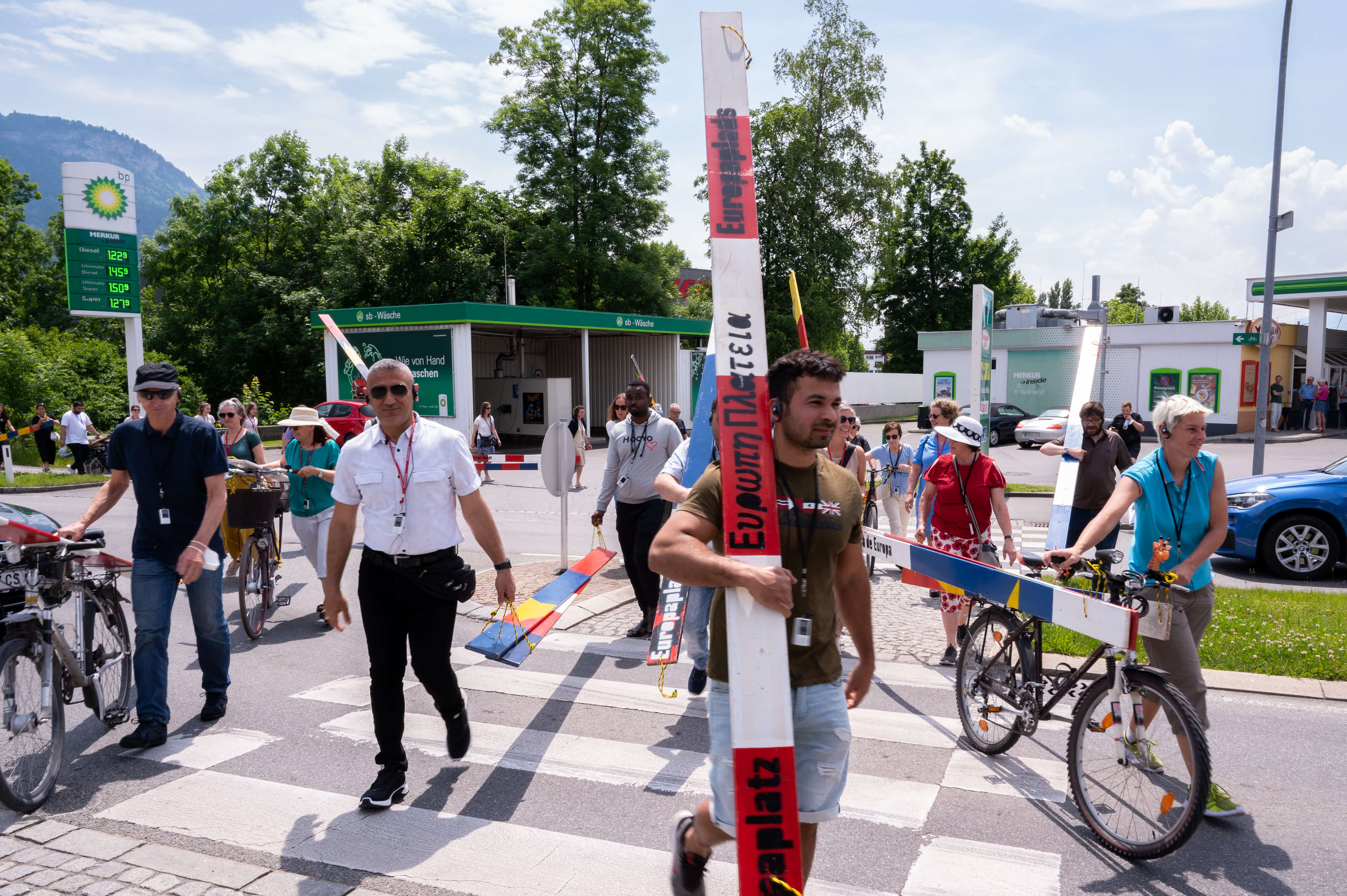 There are Europe Squares in many cities. They embody connections and political commitments to Europe. Do you know a place in Hohenems that you associate with Europe?

Following up on the current exhibition "The Last Europeans" in the Jüdisches Museum Hohenems, he confronts twelve project groups from Hohenems with the question of possible Europe Squares in the city. The artist makes their various stories visible by setting up twelve redesigned construction site signs in the urban space. They mark the temporary Europe Squares in Hohenems in the colors and languages of Europe.
Pictures: Land Vorarlberg/Alexandra Serra 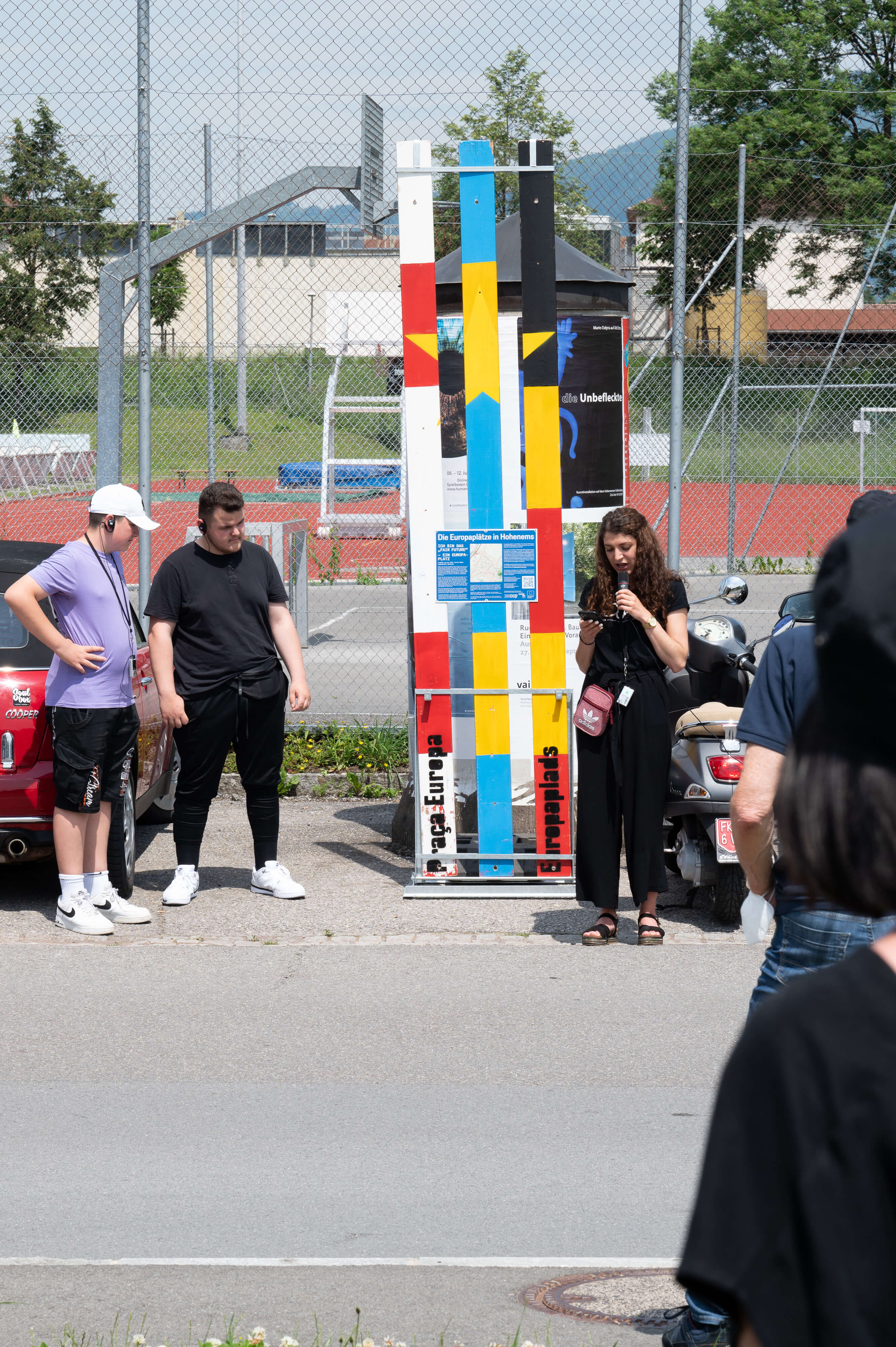 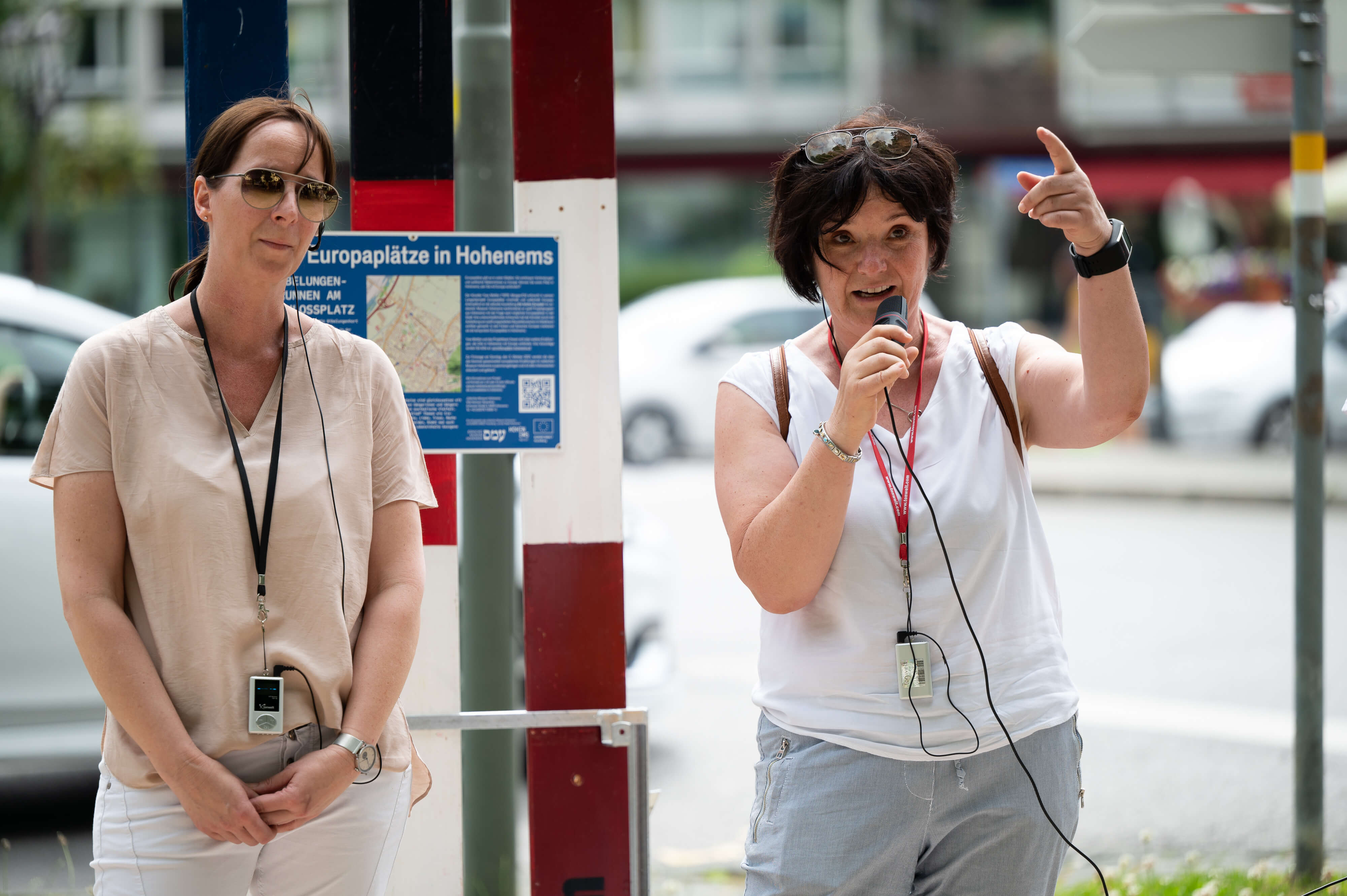 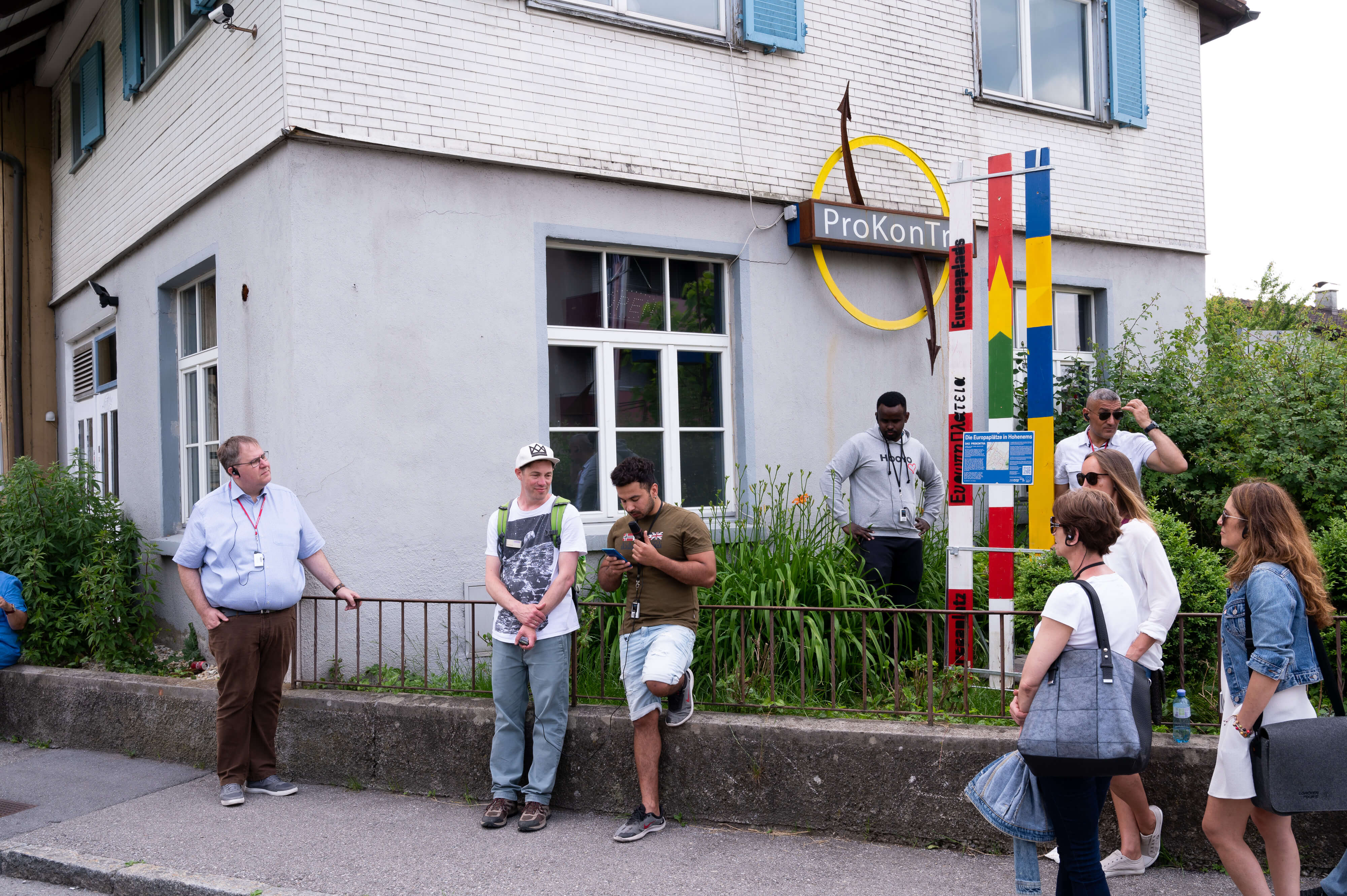 Get your exclusive edition, featuring all the world's Europe squares!

Exclusive numbered edition of 30 posters. On the background of an installation shot made in Daejeon, South Korea, I release the as exhaustive as possible list of Europe Squares in the world. The 100 x 70cm poster is printed in Berlin on Hahnemühle Photo Luster paper. 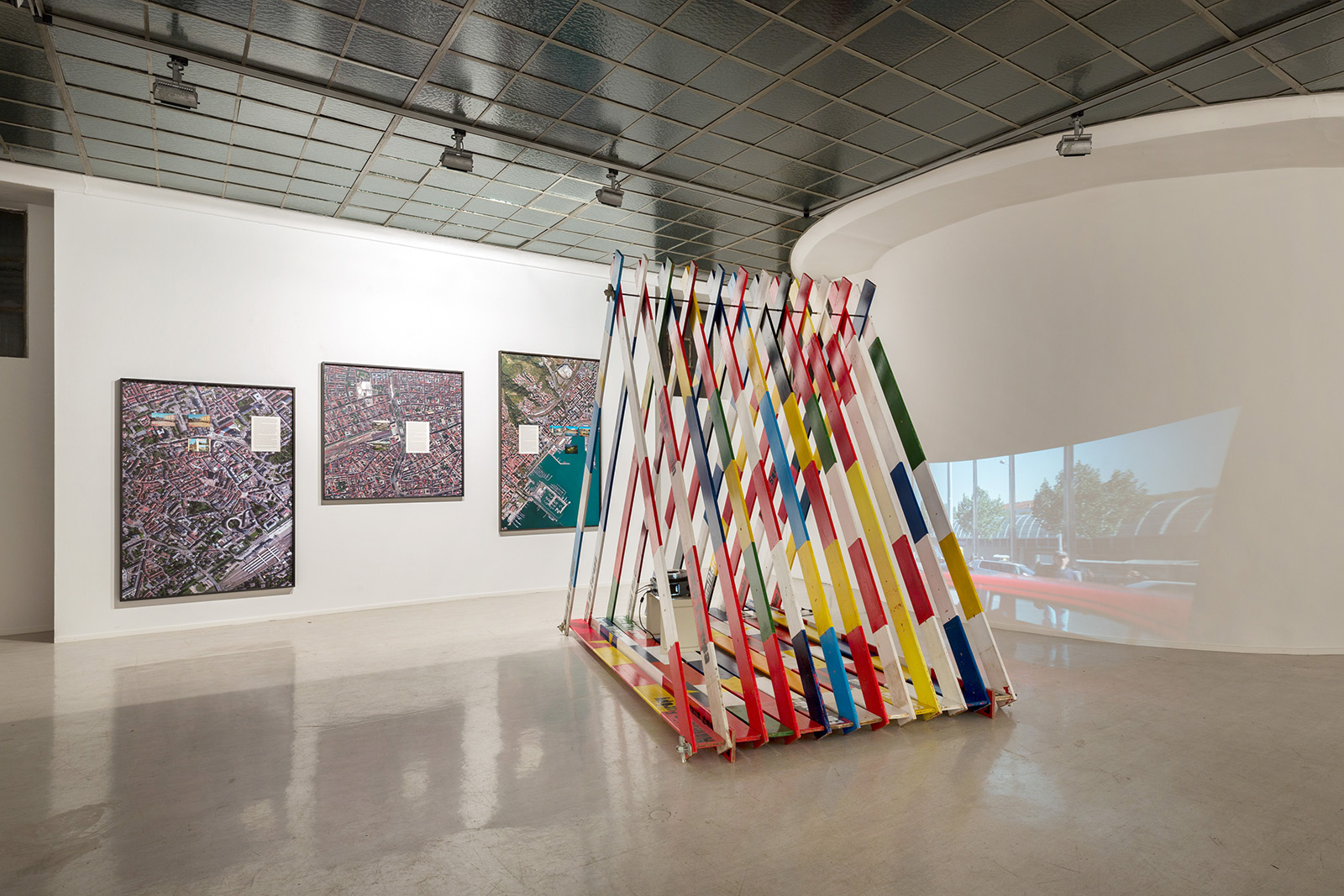 The pimped barriers take a new metaphorical form, the tent. They remind of the temporary shelter, echoing Europe's contemporary challenge towards the "others", but also its weaker citizens. It also quotes a public artwork that disappeared from Vienna's memory: A kind of tunnel on the viennese Europaplatz that vanished in the wake of the construction of the extension of the main station. In the background, three compositions tell about the visits of the mayor in the cities of Vienna, Mulhouse (F) and La Spezia (IT), all following the call of the European Council in 1958.
Photo: Matthias Bildstein, courtesy Georg Kargl, Wien 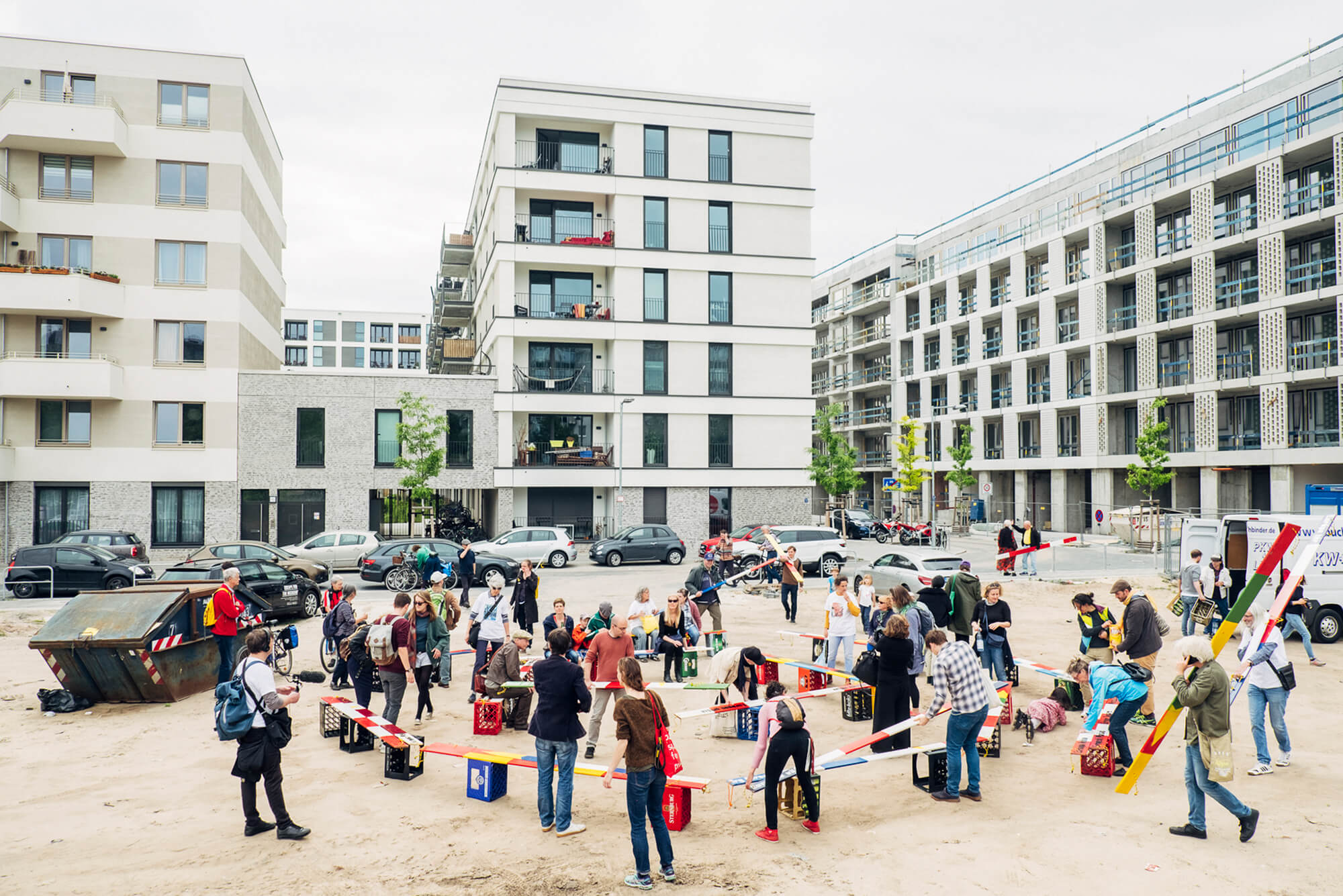 This project, consisting of walks, listening sessions, poster campaigns and a mini-festival, is about the future cultural life in the Europe city but also about how the construction of that new city part already affects the existing neighbourhoods. Website of the project: www.amrandvoneuropa.city. More about the project (in German) here. With the support of the Berlin Senat für Kultur und Europa.
A publication in the series "Berliner Hefte zu Geschichte und Gegenwart der Stadt" will be published end of 2019.
Photo: Philipp Külker 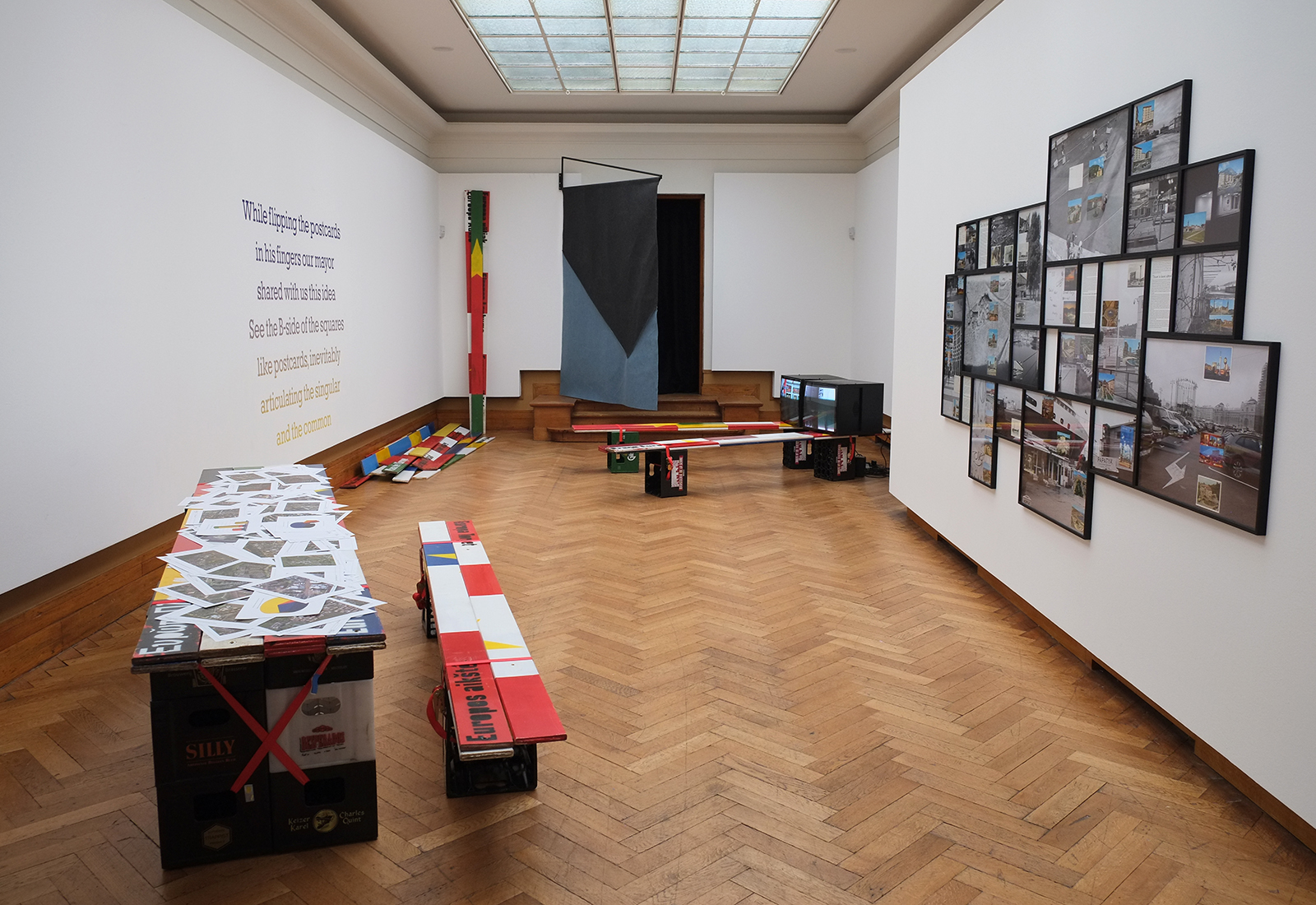 The Mayor, the Numbers and the Midi

"Europe: In the Search of new Narratives", Bozar, Brussels

The room provides several works as entry points about urban spaces called Europe Square. The works explore the way a concrete (urban, public) space can be connected to the (symbolic, abstract, distant) space made and named Europe. Modified barriers for working sites and beer crates from all over Europe serve as basic furniture. A surplus suggest a further extension or modification of the space. The table provides satellites views and a series of statistics of over 250 Europe Squares, freely browsable by the public. While the data is available, the question rises of who is enabled of making concrete use of them. An assemblage of original postcards & photos provide a thematic mapping of the relation of cities and european thematics. A fictive report mayor gone missing after searching for the ideal Europe Square provides a narrative structure. At the end of the room a double videoslideshow shows the local Europe Square of Brussels. The slideshow asks the viewer to recall his own memory of the square. While one monitor concentrates on the cycle of the weekly market, the other one reports on the physical features of the square, thus marking the rythmic complementarity of the empty square and its weekly occupation. 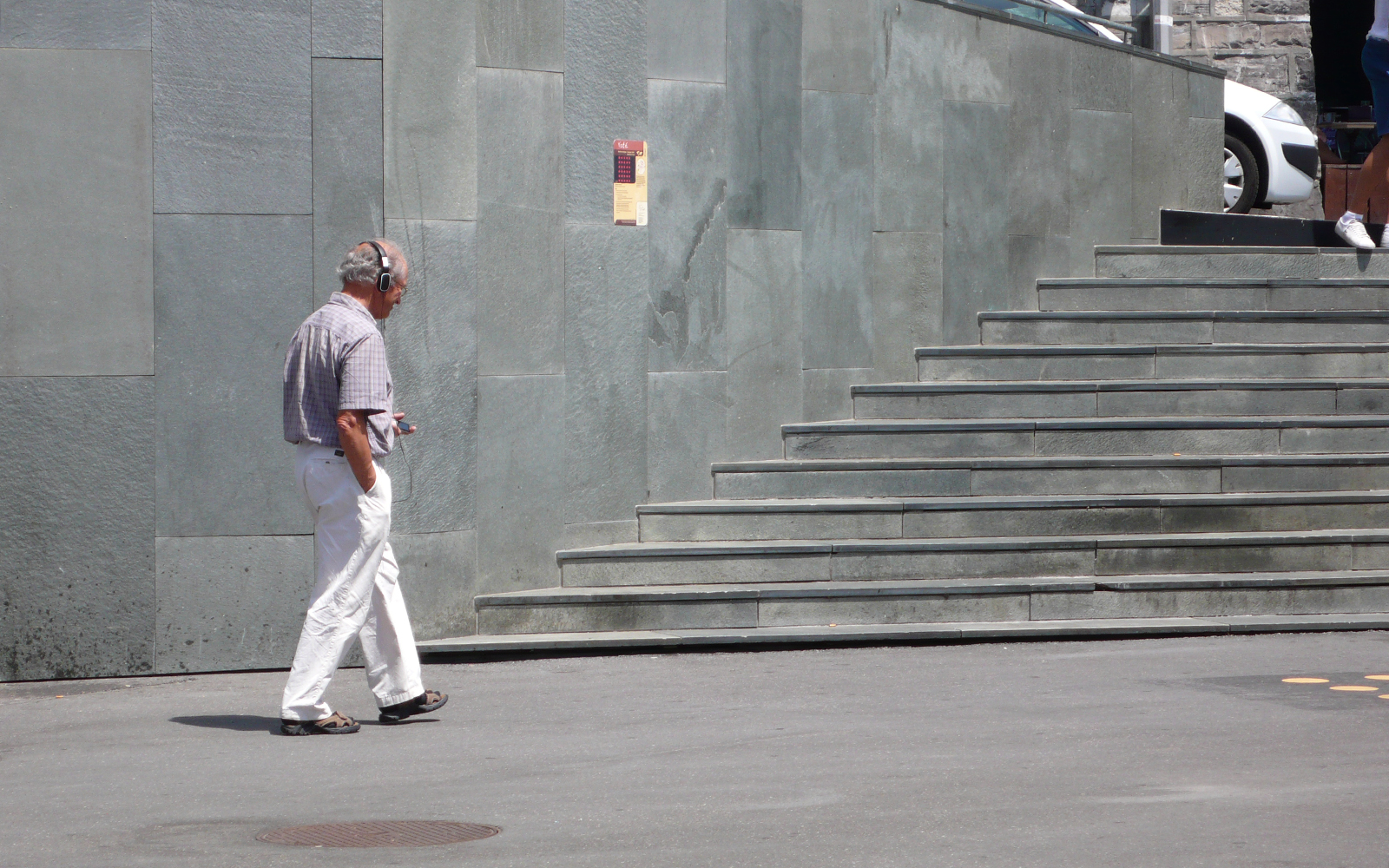 Audio-guide for a fictional visit of Europe square in two other cities, Bobigny and Berlin. Using the genre of Science-fiction, the audio-guide teleports the listener to the other city square and describes it, anchoring it onto details of the actual square, activating the listeners imaginary. 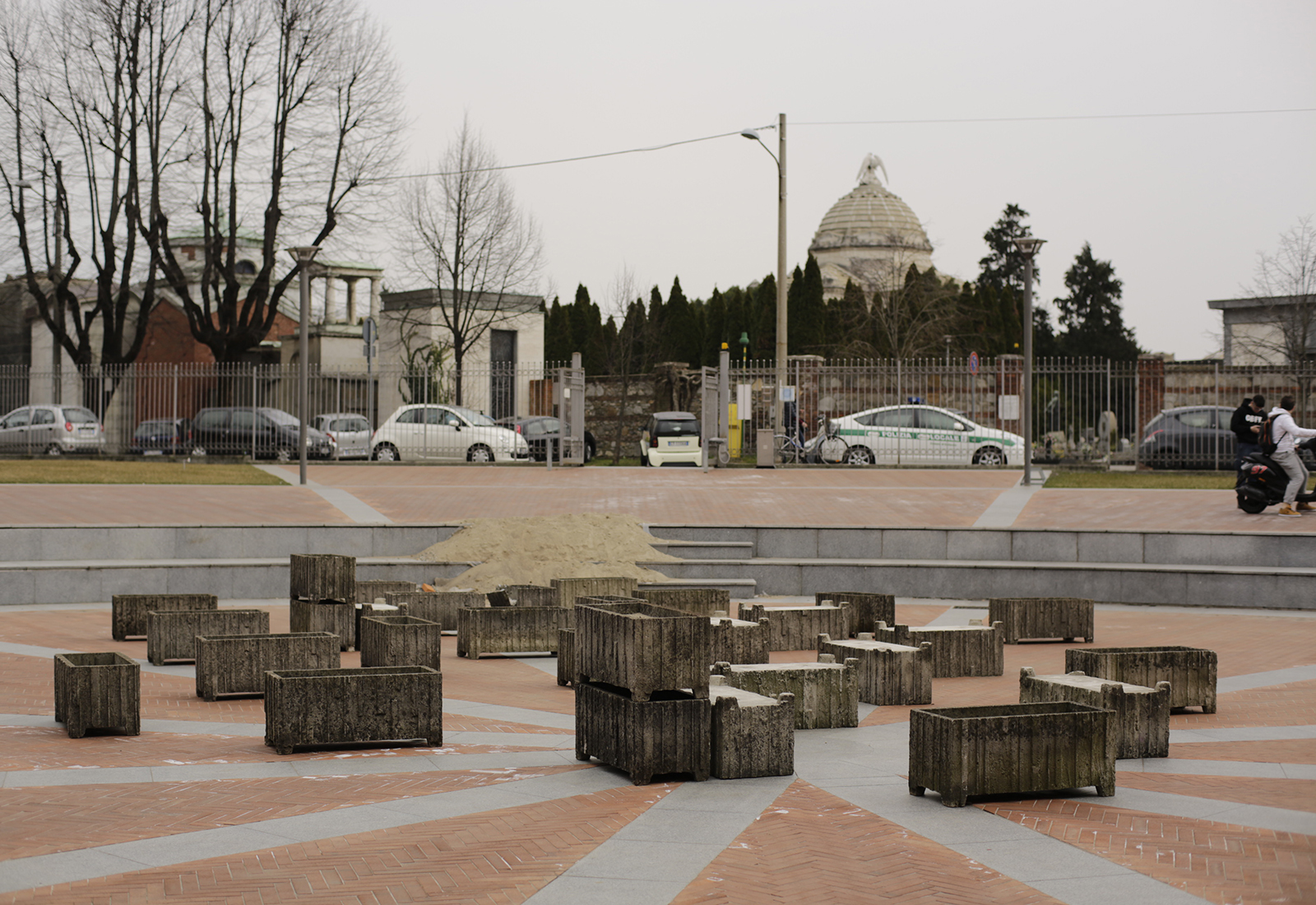 Unused concrete flowerbeds from the rooftop of the parking building occupying Gallarate’s Europe Square are repurposed to equip the empty area in front of the museum with seating and sandboxes. A roughly built viewing platform with concrete blocks formed in the flowerbeds, gives a view onto the rearranged square. On the platform one can listen to the maosnry, about good and bad concrete casting, and look at postcards of the Europe Square 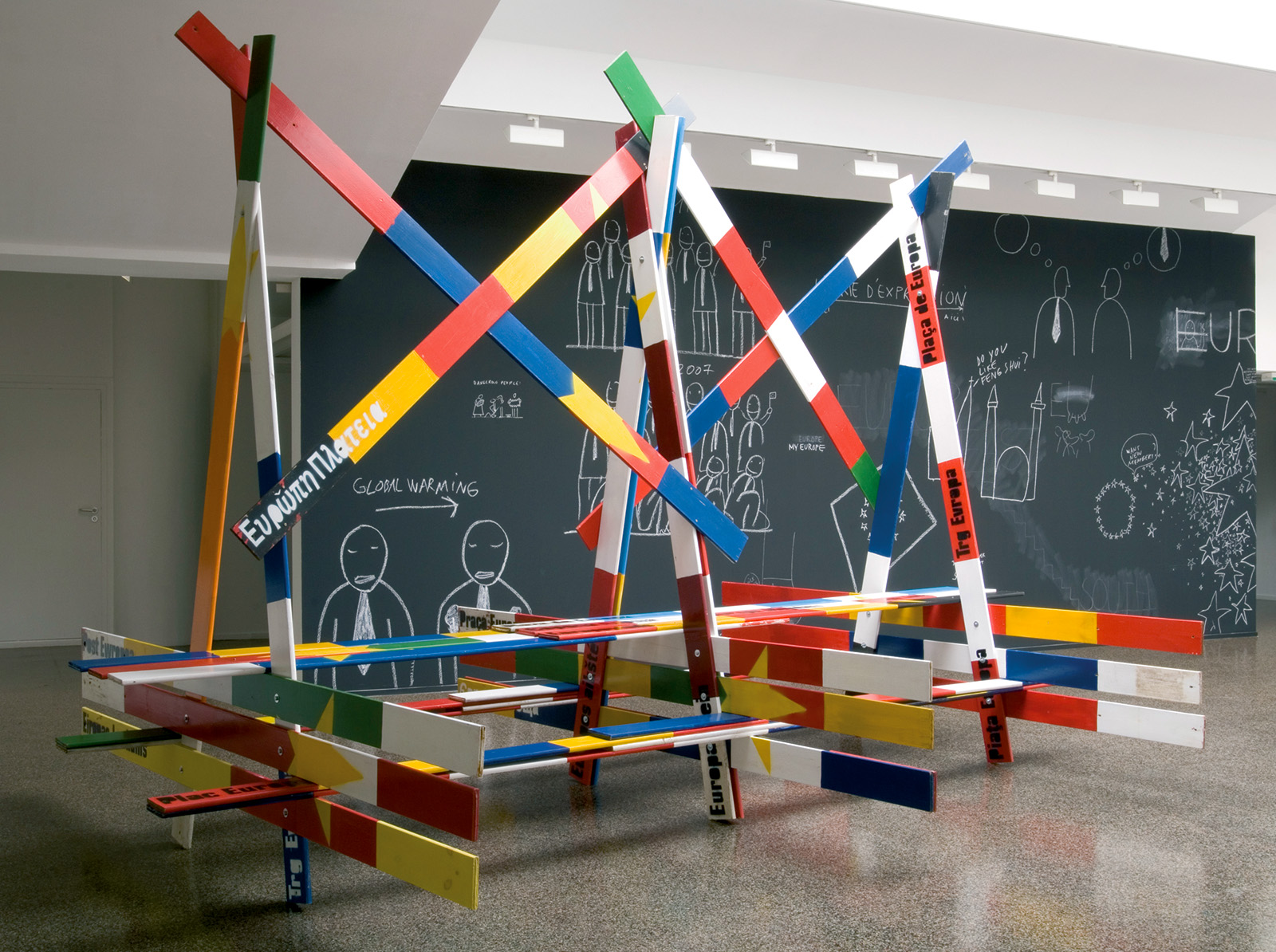 building site barriers repurposed and assembled for multiple functionalities, here as a table in an exhibition.